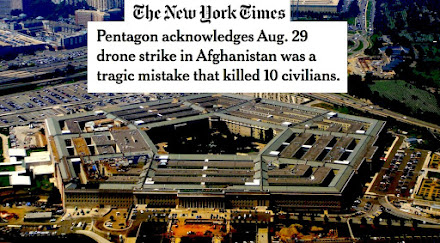 Back in September, "rogue journalist" Caitlin Johnstone wrote a piece in Consortium News about a mistaken drone strike that killed ten innocent civilians in Afghanistan. Her online article was titled, "Where Was Journalism on US Airstrikes During ‘War on Terror?’"
Johnstone's point was that the investigative journalism mobilized by The New York Times is what uncovered the fact that an August 29, 2021, drone attack on a small truck at the Kabul airport was a "tragic mistake," killing innocent people, and was not, as originally portrayed by the Pentagon, a successful drone intervention that stopped a "terrorist" before that terrorist could detonate a bomb that would have disrupted U.S. efforts to get Americans and others safely out of Afghanistan as the U.S. terminated its "forever war" in that country.
Johnstone's report claimed that getting the truth out about his particular drone strike was not only an indictment of the United States military (which it was), but that it was an indictment of the mass media, too:

The Pentagon has finally admitted to the long-obvious fact that it killed 10 Afghan civilians, including seven children, in an airstrike in Kabul last month.

In an article with the obscenely propagandistic title “Pentagon acknowledges Aug. 29 drone strike in Afghanistan was a tragic mistake that killed 10 civilians,” The New York Times pats itself on the back for its investigative journalism showing that the so-called ISIS-K facilitator targeted in the strike was in fact an innocent aid worker named Zemari Ahmadi: “The general acknowledged that a New York Times investigation of video evidence helped investigators determine that they had struck a wrong target. ‘As we in fact worked on our investigation, we used all available information,’ General McKenzie told reporters. ‘Certainly that included some of the stuff The New York Times did.’”

Why, questions Johnstone, didn't journalists investigate the thousands of drone strikes carried out by the United States military during the course of the war in Afghanistan - before the Americans decided to leave? Had they done so, Johnstone suggests, the media would have been able to document and publicize the massive numbers of innocent people who were killed by the United States' drone assassination program.
An article in the September 13, 2021, edition of The New Yorker magazine, by the way, "The Other Afghan Women," confirms (in a completely different tone of voice) that the United States' drone strikes carried out during the War in Afghanistan routinely killed civilians who had no association with terrorists or terrorism. Johnstone's complaint, in other words, is right on target.
Here is the observation from Johnstone's article that struck me as most pertinent:

The U.S. power alliance has for decades been continuously raining explosives from the sky on impoverished people in the Global South and the mainstream news reported on almost none of those instances, much less launched an in-depth investigation into whether each one killed was who the military claims they were.

The difference between the Aug. 29 airstrike and the thousands which preceded it in America’s post-9/11 wars was that this one was politicized (emphasis added).

Think about the implications of what Johnstone is saying here. She is saying that the truth about what the United States was doing in Afghanistan was hidden from the American people because the war was NOT "politicized."
She is saying, if you do think about it, that what our nation is doing, day in and day out, here and in foreign countries, ought always to be the subject of political inquiry and debate, and that when we try to "depoliticize" military activities we are, whether we realize it or not, insulating ourselves from our duties, as citizens, to know about, and take ownership of, what our nation is doing in our name.
And that is true not just in the case of military actions. It's true for everything. Unless we decide that "politics" is, in fact, the way we will try to determine, together, what we, collectively, should do, we are essentially turning over power to those who will be unaccountable to anyone.
"This one was politicized!" As a consequence, this time, we got the truth!
Let's use that as a precedent. That would be my thought!
Image Credit:
https://consortiumnews.com/2021/09/20/where-was-journalism-on-us-airstrikes-during-war-on-terror/