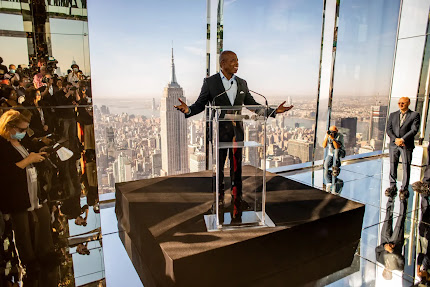 Today, voters in New York City are going to choose a new Mayor. The leading contender is Eric Adams, who is pictured above. Adams' website identifies him as "The People's Candidate." Consistent with that theme, which doesn't, really, seem to go along with the picture presented above, The New York Times says that Adams has been telling the voters, "I am you." As The Times goes on to say:

That this slogan has rung true across multiple constituencies — police critics and police officers, service workers and real estate barons — speaks forcefully to Mr. Adams’s embrace of ostensible contradictions: He can be, and prefers to be, many things at once, presenting himself as living proof that they are not mutually exclusive.

I am a big fan of Walt Whitman (and of Bob Dylan, too, of course, as any frequent reader of this blog will be able to testify). Both Whitman and Dylan have claimed, "I contain multitudes." The record should show, incidentally, that while I have provided a link to Dylan's statement, Walt Whitman said that first.
At any rate, here's the point. Whatever we might think about our great poets, and what they have said, do we actually want our elected officials to "contain multitudes?"
I, personally, think that depends on what that phrase is supposed to mean. If it means that our elected officials should go anywhere, talk to everyone, and consider all views, I think that's a plus. However, it is my strong belief that the people we elect should be elected to achieve specific policy goals. That's what elections ought to be all about. Elections are the time when our communities make a "choice." There are lots of possibilities out there, and they are often mutually exclusive. During elections, the voters get to decide what they'd like their representatives to do.
Politicians who claim that they will represent "everybody," and who say things like, "I am you," may well be hiding the ball. That's my perception, anyway. So, my prediction is that the voters in New York City will find out just who Eric Adams really is only after he has been elected, at which time some voters are going to decide that they've been tricked.
I was an elected official in Santa Cruz County for twenty years, which means that I was elected to that office on five different occasions. There never was a question about what I was going to try to do, if elected. I never made any general statement that "I am you."
At the end of my twenty years as an elected official, I wrote down "Five Simple Rules" that I think outline how a healthy politics should work. I'll paste them in, below. Pay particular attention to that last one, as you consider how Eric Adams has chosen to run his election campaign.

After twenty years on the Board of Supervisors, I've decided what it takes to do a good job as an elected official.  It all comes down to five simple rules:

Rule #1: “Answer Your Mail.”  This is just a shorthand way of saying that it's important to listen to the messages that come to you‑‑from whatever source‑‑and then to respond to them, as honestly and as positively as you can.  By following this rule, I always have lots of work to do, and the people who contact me really do get to influence the government.

Rule #2: “Remember You're In Charge.”   There is a bureaucratic momentum present in every institution (certainly including government).  An elected official needs to remember that he or she was elected to run the bureaucracy‑‑not the other way around.

Rule #4: “Go Where You're Invited.”  In other words, never be afraid to open up a dialogue and discussion with the people who didn't elect you.  You might learn something.  This is an antidote to Rule #3.

Rule #5: “Be honest.”  This means more than the minimum requirement of not taking bribes‑‑though of course that is important. What this Rule means is that you've got to tell people what you really think.  That lets them decide whether they like your positions, and whether they like you.  That puts the people in charge of politics.

Santa Cruz County Board of Supervisors