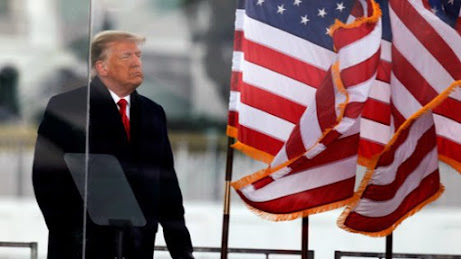 Elaine Kamarck, who is the Founding Director of the Center for Effective Public Management and a Senior Fellow at the Brookings Institution, has written an article that poses the following, rather pertinent, question: "Did Trump damage American democracy?"
Kamarck says, "No" - albeit she admits that her "No" is a "qualified No." Kamarck thinks that democracy was tested, but that "the guardrails of democracy held." Here is her list of specifics:

Did Trump weaken the powers of Congress? No.

Has Trump damaged our system of shared power between the federal government and the states? No.

Has Trump weakened the judiciary? No.

Did Trump weaken the press? No.

Read the article in its entirety if you'd like to review Kamarck's supporting arguments and explanations. I find her points basically well-taken.
There really is something that approximates the so-called "Trump Derangement Syndrome," defined by Wikipedia as "criticism or negative reactions to former United States President Donald Trump that are perceived to be irrational ... a term mainly used by Trump supporters to discredit criticism of his actions ... reframing the discussion by suggesting that his opponents are incapable of accurately perceiving the world."
It isn't the "criticisms," though, that I would call "irrational" or "inaccurate." They're rational enough - and all too accurate! Trump, as president, really did provide us with a democracy "stress test." However, Kamarck is providing wise counsel in suggesting that democracy did pretty much survive, and passed that test.
To look forward, though, instead of just looking backward, we shouldn't make the mistake of thinking that having survived the "stress test" of the Trump presidency means that we are in the clear now. Our democracy is still undergoing a "stress test," and we need to continue to be concerned whether those "guardrails of democracy" will continue to hold.
Heather Cox Richardson, the Boston College historian who writes a daily Substack blog, "Letters From An American," properly warns us in her October 26, 2021 letter that "we are in an existential fight to defend our democracy from those who would destroy it." As she says:

We are today in a struggle no less dangerous to our democracy than that of the 1860s, for all that it is fought with Facebook memes and cable television rather than artillery. And when our leaders talk fondly about Viktor Orbán, or Jair Bolsonaro— former president Trump endorsed his reelection today—we would do well to listen.