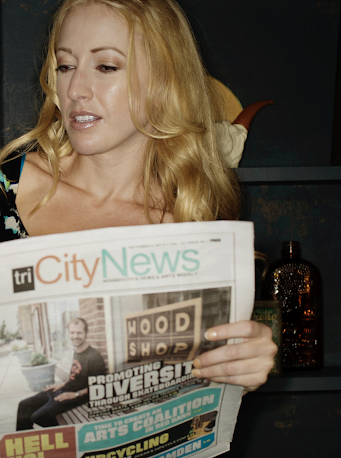 Asbury Park is a beachfront city located on the Jersey Shore, a recreational area for New York City residents. Asbury Park has a beachfront Boardwalk, and is one of three cities covered by the triCity News.
The triCity News is an alternative newspaper focusing on the arts, culture and politics in eastern Monmouth County, New Jersey. The picture above is from the newspaper's website. There is no way to read the triCity News online because the paper wants you to read what they have to say in the old-fashioned way - on paper. One section of the triCity News website is titled, "No News," and here is what it tells us:

Too many print publications today put their content online, free of charge and then wonder why their paper version went belly up. We understand that in the fast paced world of news, you must have an online presence to compete. But at triCityNews, we don't have to worry about keeping up with the media Jones. That's because we create our own news.... All of what you see and read in triCity is 100% original to us.

One of my friends recently visited Asbury Park, and he came away with a couple of pages ripped from the September 30, 2021, edition of the newspaper. That's why I am able to report what's going on there, which seems strangely similar to what is going on here, in my hometown of Santa Cruz, California.
Apparently, the City Council in Asbury Park is considering building a new downtown parking garage, and it appears that the triCity News thinks that's a bad idea. In an opinion column on page eight, titled "Publisher's Message," publisher Dan Jacobson comes out strongly against that proposed downtown parking garage, urging City Council Members to reject the idea: "The downtown stakeholders aren't stupid. And our city officials shouldn't be either."
Seems like this idea of building downtown parking garages, using public funds (some of the funds being library funds, in the case of Santa Cruz) is not restricted to our own little city. We and Asbury Park, on opposite coasts, are both small cities with beachfront boardwalks, and both Santa Cruz and Asbury Park are catering to the recreational needs of massive urban centers nearby.
Where do we differ? Well, in Asbury Park, the City Council has tabled the proposal to move forward on a downtown parking garage. Here? Just the opposite. The Santa Cruz City Council has voted to move ahead, and is spending a lot of money to advance the downtown parking garage dream. Those not keen on the idea (and there are a lot of them) call the Santa Cruz version the "Taj Garage."
In Asbury Park, the publisher of the triCity News is not confident that the City Council will keep that tabled motion on the table. He's concerned that the Council might still move ahead with the downtown parking garage plan. If that were to happen, he says, "they've got to at least hold a referendum on it. This Publisher sure hopes it doesn't come to that, as such referendums are unnecessarily divisive. That's why it shouldn't get that far. Let's move on and forget this even happened."
In Santa Cruz, where the Council did vote to move ahead with the downtown parking garage plan - with the Santa Cruz Council tossing in some affordable housing to sweeten the deal - an effort is now underway to let the voters vote on this idea. In other words, just what the publisher of the triCity News said should happen in Asbury Park, New Jersey is actually happening in Santa Cruz, California.
Today, in fact, there is a big kickoff celebration for an initiative campaign to terminate the Taj Garage plan, while still providing for affordable housing and a library. If you'd like to find out more, you can click this link and/or show up at the Farmers' Market Parking Lot at 1:00 o'clock this afternoon. 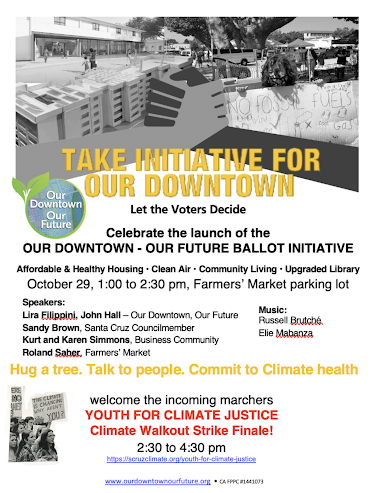