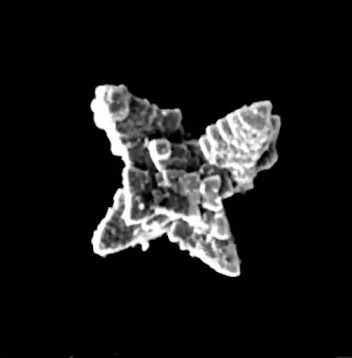 That little four-pointed star, pictured above, is not some sort of natural object, captured by an electron microscope. It is, rather,  a "microrobot." You can read all about it in an article in Scientific American, online, titled, "Tiny Robots Could Clean Up Microplastic Pollution."
Microplastic pollution is horrible, and a convincing proof that our human efforts to substitute in our own creations (plastic) for the materials that Nature has provided us has been a profound mistake. Of course, there is a problem with the World of Nature, which is why we so often try to reject it, and substitute in our own constructions. The Natural World works on the basis of life > death > life, and we humans are particularly unwilling to accept that middle term of the equation.
Our human unwillingness to accept our actual status as creatures of Nature, instead of trying to act as if we are ultimately in charge of reality, is one of the main themes explored by C.S. Lewis in his "Space Trilogy" that began with Out of the Silent Planet, continued with Perelandra, and ended with That Hideous Strength. In that third volume, Lewis highlights our desire to live only in a world of our own creation. In the novel, the agency deputized to achieve this human preeminence is called the "National Institute of Coordinated Experiments (N.I.C.E.)." It's aim is to "free humanity from nature."

Given my way of looking at the reality of our situation, in which we live "ultimately" in the World of Nature, and only "immediately" in a world of our own human construction, I was not all that delighted to learn about the idea that we might now deploy "microrobots" to clean up the mess we have already made. This does sound "nice," in exactly the same way that C.S. Lewis used the term.
I was heartened, as I read the Scientific American article, to see the following statement in its concluding paragraph:

For now ... the best way to remove microplastics from the environment is to stop them from getting there in the first place.

Surely, that is "the best way." I would suggest only one modification to this concluding statement. Preventing microplastics from getting into the natural environment is not only the best way "for now." It's the best way "forever!"
Image Credit:
https://www.scientificamerican.com/article/tiny-robots-could-clean-up-microplastic-pollution/