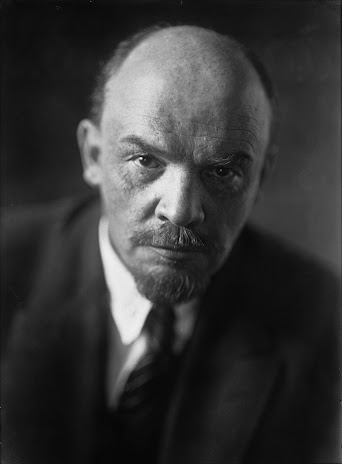 If you want to get the facts on Vladimir Lenin, pictured above, just click that link. Wikipedia has the write-up.
I recently read a novel, almost 1,000 pages long, that encompasses in a single narrative the entire history of Russia, beginning in A.D. 180 and continuing to 1945 (with a sixteen-page "Epilogue" that takes the reader to 1992, the year the book was published). Russka, by Edward Rutherfurd, is a pretty long book, but I found it absorbing. Lenin was featured in the next to last little segment, dated 1938.
Russka, however, is not where I found the following quote. I came across it several weeks after finishing the novel, and just by chance. As someone who has always liked to think about "time," I found what Lenin had to say compelling:

There are decades where nothing happens; and there are weeks where decades happen.

I am not only a history major, from my college days, but am also someone who has always been keenly interested in supersaturated solutions, particularly as seen as a metaphor for how history actually happens. To paraphrase what Lenin says, history happens "slowly, and then all at once."
Real change, in other words, can be unexpectedly precipitated out of what seems to be an unlikely environment.
I, for one, find that a hopeful thought!
Image Credit:
https://en.wikipedia.org/wiki/Vladimir_Lenin