#297 / Getting Out Of That Goldfish Bowl 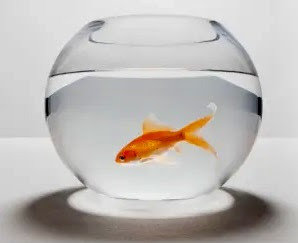 Saul Jacobson, who denominates himself an "international mentor," has published some thoughts about "The Goldfish Bowl Effect." Jacobson defines this "effect" as what happens to a person who is trapped inside an isolated, individual perspective, and who thus doesn't have the perspectives of other people to provide a corrective. A goldfish, Jacobson says, "spends life swimming in circles thinking, 'Hey, there’s a castle. Oh look. Another castle. Wow, there’s another castle.'”
Someone looking from outside the fishbowl "sees the entire picture." Jacobson suggests that he, as an "international mentor," would be a pretty good person to provide that alternative view. A price list is not included.
Jacobson's self-promotion aside, he is providing us with a pretty good lesson. Diversity and plurality of viewpoints gets us closer to "the truth," or at least to a more accurate understanding of the reality in which we find ourselves.
I was thinking about goldfish in a bowl after reading the Maureen Dowd column published in the September 5, 2021, edition of The New York Times. Dowd's column is titled, "Drowning Our Future in the Past." She is pretty much talking about that same "Goldfish Bowl Effect" that Jacobson discusses, though Dowd is considering the problem as a "collective" one, not as an "individual" one:

With a memory like a goldfish, America circles its bowl, returning to where we have been, unable to move forward, condemned to repeat a past we should escape.

Dowd is suggesting that we, as a nation, need new perspectives, and that without such new perspectives we will continue to be trapped in an unacceptable and outdated view of the world generated by our past history.
I have no quarrel with this analysis, but I do have a suggestion. "The Goldfish Bowl Effect," whether considered from an individual perspective (Jacobson), or from a collective one (Dowd), focuses on the process of "observation," what we see, and how we see it, and from what perspective our view of the world is obtained.
While questions about how and from where we observe the world are undoubtedly important, I would like to suggest that what is even more important is what we do. "Action," in other words, is even more important than "observation," and I think we need to be reminded that our ability to act, to do something that has never been thought about, or done before, is the essence of human freedom.
If we think we need a new perspective, either individually or collectively, then we have to do something new, something different. Dowd and Jacobson both seem to imply that our ability to act is based on what we "see." Of course, it often is, but it doesn't have to be.
The new and different perspectives that will get us out of the "Goldfish Bowl" will come only from some new and different action, action that can take place both individually and collectively. We don't, actually, need some sort of "mentor" to tell us this. Sometimes, of course, a "mentor" can help, but let us not discount our own ability to create a whole new reality, outside that "Goldfish Bowl" in which we seem to see ourselves, now and forever, always, entrapped.
Do something new. That's my suggestion. New perspectives will follow!
Image Credit:
https://sauljacobson.wordpress.com/2015/12/16/the-goldfish-bowl-effect/