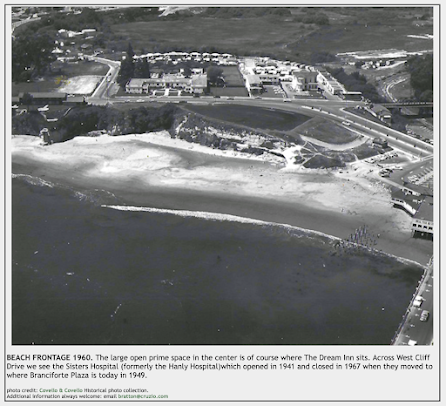 Bratton Online, which is Bruce Bratton's Santa Cruz County-specific blog, features lots of community gossip and commentary, political observations, cartoons, film reviews, and whatever else may come over the transom - and Bruce always includes some sort of historic photo at the very top of every issue. Bruce has been publishing Bratton Online since 2003. The photo above is from his October 20-26, 2021, edition.
Those familiar with present-day Santa Cruz, and with West Cliff Drive in particular, will be able appreciate how much this little slice of our local shoreline has changed since 1960, which is when Bruce says this picture was taken. That's Bay Avenue intersecting West Cliff, to the left side of the photo. Where the hospital was, there is now a big parking lot, and there are lots of condominiums off to the left of Bay. The City Council has actually approved a major development where the parking lot is, but that proposed development (at the time I am writing this) is still on appeal to the California Coastal Commission. Thus, that proposed development hasn't been built yet. If it is built, it will put a big condominium project right on the corner of Bay and West Cliff.
The big vacant area in the foreground of the photo that Bruce published is where the Dream Inn is now located. Here's what the Dream Inn looks like today, for those not familiar with Santa Cruz (you can see that parking lot I mentioned, in the background): 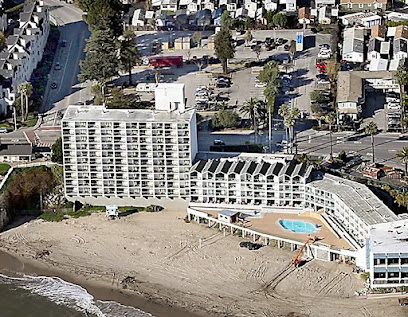 As I said earlier, things have changed a lot on that little slice of West Cliff Drive that was featured in that historic photo. More changes are coming to that area, too, if the developers get the go-ahead to fill in that parking lot with a six-story mixed use condominium-commercial development.
Going back to the historic photo Bruce featured, see if you can picture how things look today, as you continue traveling on West Cliff, heading left off the edge of that photo. If you were to head down West Cliff Drive today, off to the left of that photo Bruce published, you would end up finding Lighthouse Field. Here's how Lighthouse Field looks today, in a photo published by TripAdvisor: 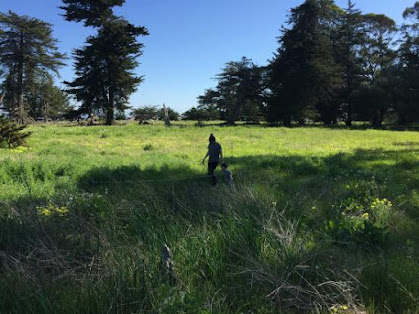 That's quite a difference from what happened just a few blocks away at the Dream Inn site. In the early 1970's, after the Dream Inn had been built, the community fought to "Save Lighthouse Field," a thirty-seven acre piece of land, right on the coast. Lighthouse Field was slated to be developed into a high-rise hotel (just like the Dream Inn), a conference center, a shopping center, a lot of high-end condominiums, and a seven-acre parking lot.
I was personally involved in the fight to "Save Lighthouse Field," as lots of people were, including Bruce Bratton - though Bruce was also, at just the same time, working with Operation Wilder, a community group fighting to stop a massive development proposal on the North Coast, just past the city limits, on what is now Wilder Ranch State Park.
Two huge development projects were proceeding, simultaneously, right at the time that city residents were able to see just how much the construction of the Dream Inn had changed their community. Both the Lighthouse Field development proposal, and the proposal to develop Wilder Ranch with 10,000 new homes, were decisively rejected by the community, and the elected officials who had advocated for those developments were replaced by elected officials with a whole different point of view.
Looking at the photo of the Dream Inn site, as Bruce featured it in his recent Bratton Online column, made me remember, again, that people often have difficulty envisioning proposed land use changes - until after they happen, and when they can actually see something in the real world. I think it's fair to say that the Dream Inn, once built, did not get rave reviews from the community. Lots of people saw this as a big mistake. The fact that people could see it in real life helped the community to understand that this was not, in fact, the kind of development they wanted for their community, and that helped lead to the rejection of the proposed development on Lighthouse Field, and to the rejection of the proposed development on Wilder Ranch.
Time has passed (a lot of time has passed), and now it seems, other people are having those development dreams. In that October 20-26, 2021, edition of Bratton Online, there is a picture of one pending proposal (six floors, on one of the main routes to the beach and West Cliff Drive). It's pictured below. The City's Planning Department website has provided renderings of a whole lot more proposed developments that look quite a bit like the one featured below. 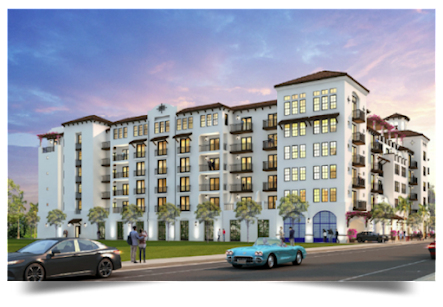 The kind of development pictured just above, and highlighted in that recent edition of Bratton Online, is typical of developments now making their way through the city's planning process. Trying to "visualize growth," before it happens, is actually quite difficult, and the "renderings" provided by developers and their architects often fail to convey the reality of what really happens after developments are approved.
With particular reference to Lighthouse Field, I think that community involvement and concern, and opposition to the proposed Lighthouse Field development, was undoubtedly stimulated by the actual Dream Inn development as a model of what was being proposed for Lighthouse Field. I wouldn't be a bit surprised to find that the actual construction of some of the recently-proposed developments in the city (like the mixed-use development now under construction at the corner of Pacific and Front Street) will make lots of people a lot more wary of what those nice looking "renderings" actually mean, in real life.
If that turns out to be true, as I think happened in the case of the Dream Inn, a small group of committed individuals can make the political changes necessary to head the city in a different direction. It is my understanding that Margaret Mead said something like that. From my experience, as shown in the case of the Save Lighthouse Point Association, she was right on target.
Image Credits:
(1) - www.brattononline.com (October 20 – 26, 2021)
(2) - https://www.santacruzsentinel.com/2019/10/23/santa-cruz-approves-new-beach-area-condo-commercial-project/
(3) - https://www.tripadvisor.com/LocationPhotoDirectLink-g33048-d7037510-i139404095-Lighthouse_Field_State_Beach-Santa_Cruz_California.html
(4) - www.brattononline.com (October 20 – 26, 2021 - "Greensite's Insights")