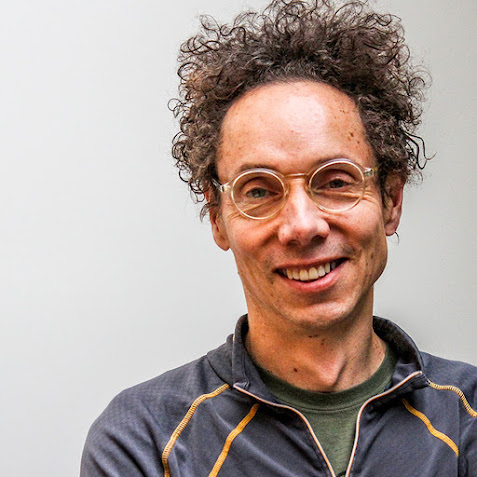 That happy-looking guy, above, is Malcolm Gladwell. The photo was used in 2016, in connection with the announcement of Gladwell's podcast. According to the announcement, Gladwell was hoping that the podcast would make his listeners cry. Since I never listened to his podcast, I don't know whether it achieved this objective or not. I am more of a reader, I guess.
Luckily, I have had lots of opportunities to read what Gladwell has to say. Gladwell describes himself as "the author of five New York Times bestsellers." The first book on his list is The Tipping Point - How Little Things Can Make A Big Difference.
I have read that book, and I enjoyed it. One of those online booksellers whose name I avoid mentioning describes The Tipping Point this way:

The tipping point is that magic moment when an idea, trend, or social behavior crosses a threshold, tips, and spreads like wildfire. Just as a single sick person can start an epidemic of the flu, so too can a small but precisely targeted push cause a fashion trend, the popularity of a new product, or a drop in the crime rate.

There is another kind of "tipping point," too. This is a tipping point related to physical behaviors and physical processes, not social behaviors or social processes.
For those who are willing to contemplate what our continued combustion of hydrocarbon fuels is doing to Planet Earth, and to the living species that inhabit Planet Earth (including our own species, of course), the possibility that we may soon reach a global warming "tipping point" is of overwhelming concern. A November 2019 article in Nature presents the possibilities:

Politicians, economists and even some natural scientists have tended to assume that tipping points1 in the Earth system — such as the loss of the Amazon rainforest or the West Antarctic ice sheet — are of low probability and little understood. Yet evidence is mounting that these events could be more likely than was thought, have high impacts and are interconnected across different biophysical systems, potentially committing the world to long-term irreversible changes.

Here we summarize evidence on the threat of exceeding tipping points, identify knowledge gaps and suggest how these should be plugged. We explore the effects of such large-scale changes, how quickly they might unfold and whether we still have any control over them.

In our view, the consideration of tipping points helps to define that we are in a climate emergency and strengthens this year’s chorus of calls for urgent climate action — from schoolchildren to scientists, cities and countries.

The Intergovernmental Panel on Climate Change (IPCC) introduced the idea of tipping points two decades ago. At that time, these ‘large-scale discontinuities’ in the climate system were considered likely only if global warming exceeded 5 °C above pre-industrial levels. Information summarized in the two most recent IPCC Special Reports (published in 2018 and in September this year) suggests that tipping points could be exceeded even between 1 and 2 °C of warming (emphasis added).

The latest IPCC report, released in early August 2021, indicates that we are definitely going to experience global warming that will exceed 1°C of warming. The report was summarized this way by The New York Times:
"A Hotter Future Is Certain, But How Hot Is Up to Us."
I am a worrier, I must admit, but I really wonder if we might have already "tipped." The news of those physical behaviors and processes now underway, as reported daily in our newspapers, are not really encouraging. There are unusually dramatic fires and floods, around the globe. And then there was the news article below, published shortly after the most recent IPCC Report was made public:

Rain has fallen on the summit of Greenland's ice sheet for the first time in recorded history, heightening concerns about the already precarious condition of its ice.

An unprecedented 7 billion tons (6.3 billion metric tons) of water pelted the ice sheet last Saturday (Aug. 14), falling as rain and not snow for several hours. This was the third time temperatures at the summit had risen above freezing in less than a decade, according to recordings taken by the National Science Foundation's Summit Station.

"There is no previous report of rainfall at this location, which reaches 3,216 meters (10,551 feet) in elevation," NSIDC researchers said in a statement, adding that the amount of ice lost in one day was the same as the average ice lost across a typical week for the same time of year (emphasis added).

I don't know whether we have "tipped," or not. If we have truly "tipped," gone past a global tipping point, then "irreversible" changes with dramatically adverse consequences for all living things are inevitable. Finding out that we have already "tipped," gone past that point, is what would make me cry.
But until we know that's true (and we don't really know that now), there is one thing that we do know:
Whatever we are doing now, we can change.
But will we change?
That, you know, is the real question!
Remember Gladwell's point. It's true. "Little Things Can Make A Big Difference."
Image Credit:
https://www.vox.com/2016/6/16/11934370/malcolm-gladwell-podcast-revisionist-history-mass-shootings