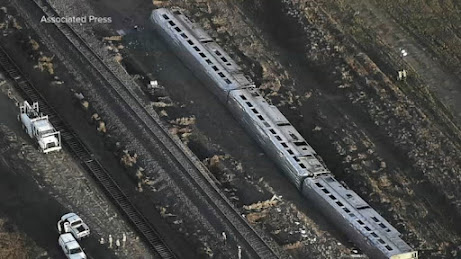 Global warming kills. We know that. Floods. Droughts. Wildfires. Hurricanes. Heat Death. All of these phenomena are associated with global warming, which so many people call "climate change."
Heat death is a particularly unsettling phenomenon, it seems to me (maybe because I keep remembering those frogs in the pot, who never quite figure out that they're going to be cooked). Click the following link to read an academic paper discussing "Heat stroke-related deaths in India." Consider, too, heat deaths in our own country. The Guardian reports that "dramatic heat and wildfires in the US Pacific north-west, where temperature records in Seattle and Portland were shattered this year, caused hundreds of people to die from heat stroke and other related conditions. Scientists say the climate crisis, driven by carbon emissions, is making heatwaves far more frequent and severe."
As global temperatures rise, our human civilization is facing challenges directly related to the continuing (and still increasing) human-caused emissions of CO2 and other greenhouse gasses. As we fail to take effective action to reduce global warming, by reducing those emissions, people are dying. Generally, as we watch what's happening, we tend to think of global warming-related deaths as occurring over wide areas. Floods affect entire regions. So do droughts. So do wildfires. So do hurricanes. So do heat waves.
But maybe global warming can kill with more precision, too.
Readers of this blog posting may remember that an Amtrak train derailed near Joplin, Montana on Sunday, September 26, 2021, one week ago today. The train was heading from Chicago to Seattle. Three people were killed, and dozens were injured. The National Transportation Safety Board promptly began an investigation, but the initial reaction was that the derailment was not really very explainable at all.
An article in The New York Times, on Monday, September 27, 2021, does provide some hints about what happened:

Most often, a derailment is caused by speeding around a turn, as was the case in fatal Amtrak crashes in Washington and Philadelphia in recent years. Since those crashes, Amtrak has installed a braking system that prevents trains from exceeding certain speeds and that applies brakes to avoid collisions with other trains or railroad equipment.

“The single largest cause of derailments and accidents are what are called human factors,” said Allan Zarembski, director of the Railroad Engineering and Safety Program at the University of Delaware.

But in this case, he said, the human factors that might cause an accident like this didn’t appear to be present. “More than likely, something broke.”

Excluding human error, he said, most wrecks are caused by faulty equipment — maybe a wheel or an axle, or the track itself.

Some passengers reported that the train ride felt bumpy for many miles, which might signal a problem with the train’s suspension system. But even if a train’s crew takes note of a problem like that, its source could be difficult to identify while the train is running between cities, Mr. Zarembski said.

If the turbulence was more sudden, Saturday’s heat could also be to blame, said Russell Quimby, a retired accident investigator for the National Transportation Safety Board.

Mr. Quimby said he suspects the train may have hit a section of the track that had buckled from overheating.

“When that happens, the train can’t negotiate that tight little change in the curvature of the track, and it will run up over the rail and derail and fall over the side like you see in the pictures,” he said.

Around the time of the accident, the temperature in Joplin peaked at 84 degrees. Railroad tracks are usually about 20 to 30 degrees hotter than the outside temperature, Mr. Quimby said, which “could be well above” what the tracks were designed to withstand (emphasis added).

To me, the idea that global warming might operate, to deadly effect, in such a small and precise way, is just one more reason for us to take global warming as the very serious challenge it is. Not only does global warming cause disasters over wide areas, it can operate on a micro-level, too. Our taken-for-granted infrastructure, both natural and man-made - the infrastructure that supports our civilization - is starting to fail.
Image Credit:
https://abc7chicago.com/amtrak-derailment-joplin-montana-zach-schneider/11051771/