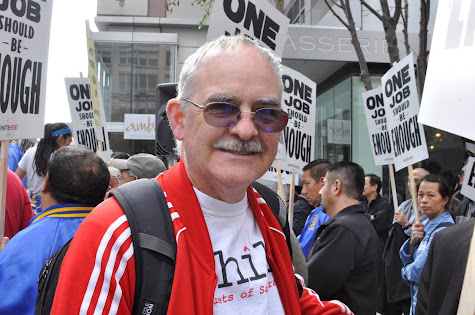 That is Tim Redmond, pictured above. Redmond has been a political and investigative reporter in San Francisco for more than thirty years, spending much of that time as executive editor of the San Francisco Bay Guardian. He is the founder of 48hills, which is an alternative news and culture site, and which carries on the tradition of the Bay Guardian.
Launched in 2013, 48Hills now attracts 35,000 readers a week. "It covers news, politics, arts, music, nightlife, and a vast array of cultural topics." 48Hills is entirely community supported, and you are certainly invited to assist. You can, however, without paying anything, sign up for periodic bulletins. If you are interested in politics - and particularly in the politics of land use - signing up for those bulletins would be a good idea. While the publication is San Francisco-centric, of course, 48Hills has lots of good information about state and national decisions and policies that are relevant to what goes on in most California communities.
In fact, I decided to mention Tim Redmond and 48Hills in this blog posting because of a bulletin that hit my mailbox on the evening of September 26, 2021. Redmond's advisory - definitely San Francico-centric - was titled, "Sorting out the upcoming election madness." Mostly, that September 26th bulletin provided information about upcoming political changes in San Francisco. However, it also talked about what Redmond called "The entire Yimby narrative." While Redmond is focused on a particular project proposal in San Francisco, I think what he says is relevant in my own home town, Santa Cruz:

The entire Yimby narrative—and a contentious battle over the future of the Tenderloin and affordable housing—is set to come to the full board Tuesday/28.
At issue is a plan by a developer and a local Christian Science Church to build 316 units of what amount to tech-worker dorms at 450 O’Farrell St.
The original plan for the site called for a project with 176 units, including some big enough for families. That had broad-based community support.
But the Forge Development said that even traditional market-rate housing didn’t “pencil out,” so the church has asked to change the project.
As we noted Sept. 6:
Think about that message. Forge had all of its entitlements and no “Nimby” opposition. But the determining factor on what gets built in San Francisco is not, by and large, community input or approval delays. It’s international speculative capital deciding where the highest return is. And more housing for families (much less housing that’s remotely affordable) doesn’t seem to make the cut right now.
The hearing was continued from Sept. 7. The supes don’t like overruling the Planning Commission, but there’s massive opposition in the community to this one.
At lot of it will come down to Sup. Matt Haney, who represents the district (and is, apparently, running for state Assembly).
That hearing starts at 3pm (emphasis added).

The project just mentioned is a lot like a project that has become infamous in Santa Cruz - the 831 Water Street project. What really makes the difference and decides what happens (in San Francisco and Santa Cruz, both) isn't what the community needs, but "speculative capital deciding where the highest return is."
Demands for "more" housing - from YIMBY proponents and others - does not, in fact, mean more "affordable" housing, or even more housing that will meet the needs of local families. Again, that's true in both San Francisco and Santa Cruz.
Take it from Tim! He's been around for a good long time, and he's a pretty smart guy! He knows what really counts. What those demands for "more" housing mean - in San Francisco and Santa Cruz - is "more money for the guys who already have a quite lot of it."
Image Credit:
https://48hills.org/author/tim/