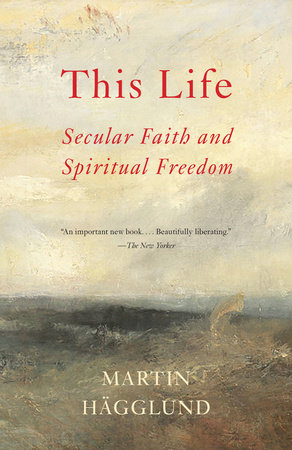 Here is a book worth reading: This Life: Secular Faith and Spiritual Freedom, by Martin Hägglund. Hägglund teaches at Yale University, where he is the Birgit Baldwin Professor of Comparative Literature and Humanities.
I consider this book to be rather unusual - and unusually challenging. It begins with a section titled, "Faith," which is an attack on religion - an attack carried forward throughout the rest of the book. The last chapter before the conclusion is on "Democratic Socialism," and in that chapter Hägglund makes an ardent appeal that we should discard capitalism and establish a socialist state. In the course of the 389 pages of his text, Hägglund provides an extensive discussion and analysis of the thinking of Kierkegaard, Karl Marx, Hegel, Martin Luther King, Jr., and Karl Ove Knausgaard. Among others.
It would be hard to overstate the ambition of this book. It was, and is, a life-defining project. If you read it, be prepared to be ambitious yourself, because Hägglund is expecting his readers to be serious about the question he wants his readers to address: what is the purpose and meaning of your life?
Hägglund is most concerned to persuade his readers that any Buddhist, Christian, or other religious view of our life - any view that suggests that the "meaning" or "purpose" of our life is found "afterwards," or in some place other than in the concrete circumstances of the actual life we are living right now - must be definitively and decisively rejected. Any such thought, says Hägglund, is a fundamental error, and in fact a travesty and a trick.
The last chapter of Hägglund's book is titled, "Conclusion: Our Only Life." It is a meditation, among other things, on the death (and life) of Martin Luther King, Jr. In this final chapter, as in his opening pages, Hägglund wants to convince his readers that having faith in the meaning and significance of our "secular" existence is what gives us what he defines as "spiritual freedom."
I enjoyed Hägglund's in-depth confrontation with the important thinkers he talks about in This Life. And I agree with his basic point, that we have this life, and this life only, to live.
Hägglund regards religion as a deceptive and ignoble trick, which I do not. In fact, Hägglund's basic message reminds me of what George Fox said, more than anything else. Fox was an ardent Christian, who saw a vision on Pendle Hill, in Lancashire, England, and then initiated a new form of worship, a silent gathering of persons, together, to wait upon the spirit. Fox was a founder of the Religious Society of Friends. He was the first Quaker.
Here is what Fox said, which I think is the point that Hägglund advances, too:
Ye have no time but this present time, therefore prize your time, for your soul’s sake.
Hägglund would not say "soul." He would say "life." But except for this difference in terminology, I think both Hägglund and Fox would agree.
And I do, too.
Image Credit:
https://www.penguinrandomhouse.com/books/248368/this-life-by-martin-hagglund/