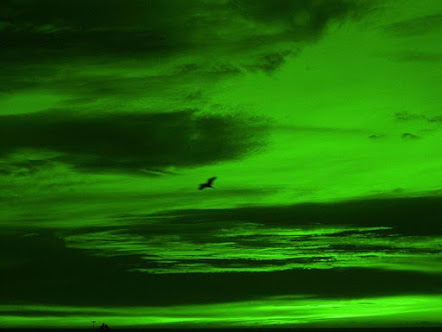 Elizabeth Kolbert has written a book titled, Under A White Sky. In that book, Kolbert reports on a number of current efforts to deal with our global warming and environmental crisis. The policy issue propounded in her book is whether or not geoengineering efforts can be successful in helping the Natural World to recover from the injuries that have been inflicted upon it by the past and continuing actions of human beings, and particularly by our continuing and increasing release of greenhouse gases to the atmosphere.
I have commented on Kolbert's book in an earlier blog posting. Her book is definitely a cautionary tale. Engineering our way out of the global warming crisis that human beings have caused (and continue to exacerbate) is anything but a sure bet. The "White Sky" that Kolbert forecasts, should we actually try to implement one of the most popular "geoengineering" solutions to our global warming crisis, is an omen of a world we never want to inhabit.
oooOOOooo
More recently, I have read a book by Peter D. Ward, who is a paleontologist. Ward's book, Under A Green Sky, was written before Kolbert's book, and I have to believe that Kolbert was aware of what Ward wrote. Surely Kolbert's title was not the result of some kind of bizarre convergent evolution. Ward's book, like Kolbert's, deals with global warming and mass extinctions. Ward's book is also, most definitely, a cautionary tale.
At one level, Under A Green Sky is a rather exciting detective story, as Ward and other paleontologists roam through the entire world, uncovering and interpreting geologic strata to help them discover what caused the various mass extinctions that we know have occurred over geologic time.
Well, what did cause them? Not gradual climate change, once thought to be the cause. Not the impacts of giant meteorites, either. No. All of the previous mass extinction events have been caused by good old carbon dioxide:

It seems fairly clear that by the end of the Permian period, ocean circulation had changed so that the deep ocean bottoms filled with great volumes of warm, virtually oxygen-free seawater, This seems like the same thing that happened at the end of the Paleocene epoch but at a vastly increased scale, and with vastly more destructive results. The Permian bottom waters were warmer than those of the Paleocene and much less oxygenated. The stage was set and needed but one more trigger, and it seems both had the same trigger - a short-term but massive infusion of greenhouse gasses into the atmosphere changed the nature of the oceans (emphasis added).

In case you haven't been paying attention to the recent news, the warming of the seas, accompanied by the loss of oceanic oxygen, is of growing concern to scientists. Between 2014 and 2016, for instance, the kelp forests off the Northern California coast were reduced by over ninety percent. There is also great concern about what is happening to terrestrial plant life. The scientists who are worrying about this have probably read Ward's book. It is a rather compelling and disturbing thing to read.
Beginning on Page 137, Ward proposes that "each of the greenhouse extinctions had a similar cause," and then he outlines the sequential steps:

First, the world warms over short intervals of time because of a sudden increase of carbon dioxide and methane...

Then, the warmer world affects the ocean circulation systems and disrupts the position of the conveyor currents. Bottom waters begin to have warm, low-oxygen water dumped into them.

Then, warming continues, and the decrease of equator-to-pole temperature differences reduce ocean winds and surface currents to a near standstill.

Then, mixing of oxygenated surface waters with the deeper and volumetrically increasing low-oxygen bottom waters decreases, causing ever-shallower water to change from oxygenated to anoxic.

Finally, the bottom water is at depths where light can penetrate, and the combination of low oxygen and light allows green sulfur bacteria to expand in numbers and fill the low-oxygen shallows. They live amid other bacteria that produce toxic amounts of hydrogen sulfide, and the flux of this gas into the atmosphere is as much as 2,000 times what it is today. The gas rises into the high atmosphere, where it breaks down the ozone layer, and the subsequent increase in ultraviolet radiation from the sun kills much of the photosynthetic green plant phytoplankton. On its way up into the sky, the hydrogen sulfide also kills some plant and animal life, and the combination of high heat and hydrogen sulfide creates a mass extinction on land.

"What would Earth be like in the midst of such an event?" This is a question posed by Ward, who also provides the answer:

No wind in the 120-degree morning heat, and no trees for shade. There is some vegetation, but it is low, stunted, parched. Of other life, there seems little...The land is hot barrenness.

Yet as sepulchral as the land is, it is the sea itself that is most frightening. Waves slowly lap on the quiet shore, slow motion waves with the consistency of gelatin. Most of the shoreline is encrusted with rotting organic matter...Yet that is not the biggest surprise. From shore to the horizon, there is but an unending purple color...not looking like anything of our world. No fish break its surface, no birds or any other kind of flying creatures dip down looking for food. The purple color comes from vast concentrations of floating bacteria, for the oceans of Earth have all become covered with a hundred-foot thick veneer of purple and green bacterial soup.

Not far from the fetid shore, a large bubble of gas belches from the viscous, oil slick-like surface...The gas emanating from the bubble is not air, or even methane, the gas that bubbles up from the bottom of swamps - it is hydrogen sulfide, produced by green sulfur bacteria growing amid their purple cousins.

There is one final surprise. We look upward, to see the sky. High, vastly high overhead there are thin clouds, clouds existing at an altitude far in excess of the highest clouds found on our Earth. They exist in a place that changes the very color of the sky itself: We are under a pale green sky, and it has the smell of death and poison...

White sky? Take warning.
Green sky? Too late!
Let's keep our planet blue. Let's save life on this lovely planet, including our own lives.
There isn't much time left! 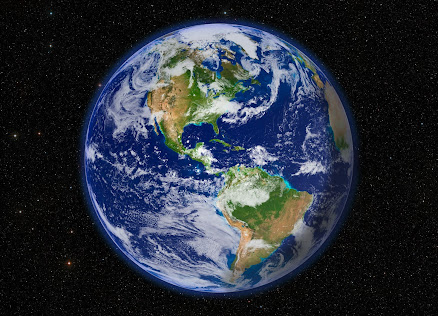