An article published online by Aeon tells us "How Equality Slipped Away." According to this article, "our particular species of humans has been around for about 300,000 years and, best as we can tell, for about 290,000 of those years we lived materially poorer but much more equal lives."
So what happened during the last 10,000 years? We have gone from Ubuntu (click that link and/or see the picture below) to the construction of human societies that are premised upon vast disparities in wealth and privilege. And that definitely includes our own society, here in the United States of America, where massive income and wealth inequality is one of the realities that most determines how we live today. 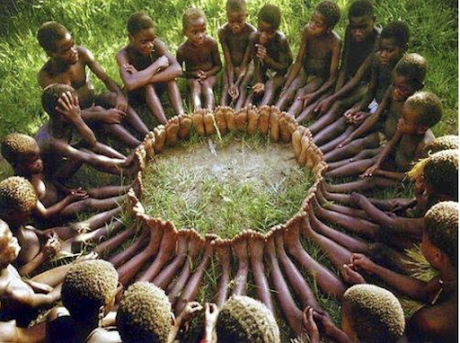 Kim Sterelny, who is a professor of philosophy at the Australian National University, and who has won several international prizes in the philosophy of science, is the author of the article in Aeon to which I am citing. He says that we went from societies that were fundamentally egalitarian to our currently unequal ones when farming and "storage" supplanted economies based on foraging. Sterelny concludes his article by stating that "egalitarian, cooperative human communities are possible, and that widespread sharing and consensus decision-making aren’t contrary to ‘human nature’ (whatever that is)."
Well, that sounds rather "upbeat," by way of a conclusion - at least if you think that equality is basically a good thing. However, Sterelny goes on to point out that such egalitarian and cooperative communities are "not inherently stable." I guess not! I am not seeing too much evidence that there are any such communities, anywhere, in our world today - except, maybe, those religious communities that sill exist, here and there, and which you can find out about by reading the Plough Quarterly.
As I pondered Sterelny's explanation of how equality "slipped away," as something that used to be, but is no longer, the basic organizing principle for human communities, Sterelny's observations about "storage" seemed most pertinent:

For mobile foragers, sharing is insurance. Hunting especially is very chancy, requiring both luck and skill, so it’s adaptive to share if you succeed today, on condition that others share with you when you fail. Targeting plants and small animals is more of a sure bet, though in some forager communities even these are shared, as the social rewards of generosity are important, and the social costs of refusing are high since the intimacy of forager camps makes success hard to conceal.

Storage, however, tends to erode sharing. Storing, like sharing, is a way of managing risk, and farmers are more likely to store than to share. Variation in supply within the community is likely to flow from variation in commitment and effort, not differences in luck. Local bad luck – unfavourable weather, a plague of pests – will probably affect everyone in a community, which makes sharing a poor form of insurance. It’s to my advantage to share with you, if my good years are your bad ones, and vice versa (so long, of course, as you return the favour). Not so if we’re both having it tough at the same time, as we have no surplus to share; and not so if we both have good years together, as then we don’t need one another (emphasis added).

Another way of talking about "storage," particularly in a modern, non-agricultural context, is to equate "storage" to "wealth accumulation."
In other words, if we want to build a more "equal" world, we might want to try turning our attention to the massive income inequalities and wealth inequalities that typify our contemporary societies (and particularly in the United States). Developing an economy and society in which wealth accumulation isn't the objective of every person could go a long way to recapturing that spirit of equality that can sustain us for the long term.
Image Credits:
(1) - https://aeon.co/essays/for-97-of-human-history-equality-was-the-norm-what-happened
(2) - https://www.gapatton.net/2014/07/197-ubuntu.html