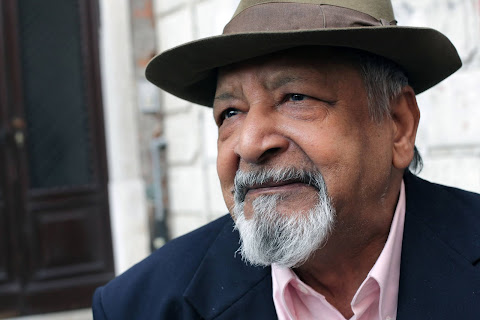 That is V.S. Naipaul in the picture above. As Wikipedia tells us, Naipaul, who died in 2018, was "a Trinidad and Tobago-born writer of works of both fiction and nonfiction."  Naipaul is "known for his comic early novels set in Trinidad, bleaker novels of alienation in the wider world, and his vigilant chronicles of life and travels." He published more than thirty books over fifty years.
This blog posting was stimulated not by my personal reading of Naipaul, but by a reference to Naipaul in an August 4, 2021, New York Times column by Bret Stephens. Stephens is a political conservative, and his August 4th column was titled, "What Should Conservatives Conserve?"
In his column, Stephens writes approvingly of Naipaul's celebrated 1990 lecture on the subject of "Our Universal Civilization." Stephens makes clear that what Naipaul means by this is "The West." Stephens thinks we should be conserving an appreciation of "The West," or what is often called "Western Civilization," and that we should also, specifically, appreciate the contributions of the American Revolution. I am not exactly a political "conservative," but I do agree with Stephens' sentiments on this last point.
In his column, Stephens mentions the uniquely American idea that all human beings have an "inalienable right to the pursuit of happiness." Here is Stephens' reference to what Naipaul has to say about that:

"This idea of the pursuit of happiness is at the heart of the attractiveness of the civilization to so many outside it or on its periphery,” said Naipaul in his 1990 speech. “So much is contained in it: the idea of the individual, responsibility, choice, the life of the intellect, the idea of vocation and perfectibility and achievement. It is an immense human idea. It cannot be reduced to a fixed system. It cannot generate fanaticism (emphasis added).”

I have long thought that we have not paid nearly enough attention to exactly what the Declaration of Independence means when it claims that it is "self-evident" that every person has an "unalienable" right to "life, liberty, and the pursuit of happiness." Those who study (or teach) the Constitution, as I do, will be familiar with the Ninth Amendment, the statement within the Bill of Rights that played such an important role in securing, for women, a "right to choose," as that right was recognized by the Supreme Court in Roe v. Wade, a Supreme Court decision that came by way of Griswold v. Connecticut.
The Ninth Amendment provides that "the enumeration in the Constitution, of certain rights [like the Fourth Amendment right to be free from arbitrary searches and seizures, for instance] shall not be construed to deny or disparage others retained by the people." And, of course, the Framers of the Constitution definitely knew that those "other rights" included the unalienable rights claimed for all of us in the Declaration, including the right to the "pursuit of happiness."
The assertion that you and I - and everyone - can absolutely claim an individual and unalienable right to the "pursuit of happiness" - and that we can each decide and determine for ourselves what happiness will require, for us - is truly an "immense human idea," as V.S. Naipaul claimed.
The question for all of us - individually and collectively - is whether we will actually accept the challenge that is posed to us by the assertion that we have the right to "pursue happiness."
To take the time to discover what will make us happy, and then to realize, exactly, what that truly means for what we will do, and for how we will live, and then actually to pursue, through thought and action, those things that will bring us "happiness," is a challenge that will define the meaning and purpose of our individual lives, and the meaning and purpose of our collective life, the life we make together.
Claiming that we all have a right to the "pursuit of happiness" is an all-encompassing assertion. It is an idea that is life defining. Naipaul was right.  This is an "immense human idea."
Image Credit:
https://time.com/5367849/vs-naipaul-legacy-reactionary/