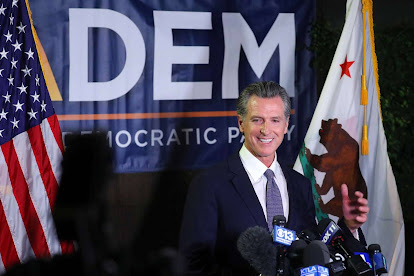 On September 16, 2021, The San Francisco Chronicle editorialized about the failure of the Newsom recall. The picture above comes from the online version of The Chronicle's editorial, which may, or may not, be something that non-subscribers can access.
For those who might be stymied by a "paywall" problem, if they click that link, let me summarize the basic thrust of The Chronicle's editorial by giving you the headline: "Recall was a slaughter. Will Newsom start acting boldly or play it safe until 2022?"
Below, I am providing the final two sentences of the editorial, just to make crystal clear that Newsom's hometown newspaper wants him to pursue the "acting boldly" option, not the "play it safe" approach:

It remains to be seen, however, if Newsom will regard his recall sweep as a mandate for bold action or justification for cautious triangulation. California doesn’t the have time, or, likely, the inclination, to indulge the latter.

Mentioned in the editorial was a promise Newsom made in his 2018 campaign for Governor. He "vowed to lead a 'Marshall Plan' to build housing." Instead of doing that, says The Chronicle, housing production was "a mere fraction of what Newsom promised."
If our state really wants to pursue a "Marshall Plan" for housing, we need to understand what would be involved in such an approach. The approach actually supported by The Chronicle, and by the State Legislature (and, as it turns out by Governor Newsom), is not based on the "Marshall Plan" at all, and is not going to achieve the results that The Chronicle says it wants to see.
So far, the state's approach to our affordable housing crisis (strongly supported by The Chronicle and now supported by Governor Newsom's decision to sign both SB 9 and SB 10) has been to cut back on environmental review, and on local government discretion, to allow developers to "build, build, build." The idea, of course, is that there is some sort of "law of supply and demand" that turns "more" housing into housing that is "more affordable." That's a "Market Plan," not a "Marshall Plan."
Unfortunately, the idea that the "market" can produce affordable housing does not pan out. The experience in my own hometown, Santa Cruz, indicates the problem. There have been lots of new housing developments approved, but only a very small percentage of the new units will ever be affordable to persons with average and below average incomes. Rich people, who quite frequently do not currently live or work in Santa Cruz, are buying up the new housing (and existing housing, too, for that matter) and are often turning both new and existing housing into "second homes," left vacant much of the year. Other coastal communities are having the same experience. In Carmel, 50% of all housing units are vacant. Luckily, Santa Cruz is not there yet, but that's where we are heading.
Betting on "the market" to produce housing that is affordable to persons with average or below average incomes is a failing strategy because the purpose of a "market" is to allocate scarce goods to those who have the most money. And that is how it works, too. In our 21st Century society, conditions of wealth inequality mean that ordinary men and women can never outcompete those at the top of the income scale. Pretending we can do that (and that the need to produce "affordable" housing for the market should trump every other community value) is simply a license for developers to maximize their profits, while undermining the integrity of city neighborhoods and the long-term financial stability of the city, and doing very little for the people who actually need the affordable housing that is the bait affixed to the developers' hook.
As opposed to the "market" approach, let's take that Marshall Plan idea seriously!

The Marshall Plan, also known as the European Recovery Program, was a U.S. program providing aid to Western Europe following the devastation of World War II. It was enacted in 1948 and provided more than $15 billion to help finance rebuilding efforts on the continent. The brainchild of U.S. Secretary of State George C. Marshall, for whom it was named, it was crafted as a four-year plan to reconstruct cities, industries and infrastructure heavily damaged during the war and to remove trade barriers between European neighbors—as well as foster commerce between those countries and the United States (emphasis added).

As indicated above, the "Marshall Plan" was not a plan that relied, primarily, on "market forces." It relied on direct government investment (albeit this investment did, of course, then stimulate the market to help build an economic recovery). A "Marshall Plan" approach is what is actually needed in the United States, to address our affordable housing crisis.
We need a program by the government (and it is the federal government that has the most access to the money needed) that directly subsidizes and underwrites housing that will be rented or sold, exclusively, to persons with average or below average incomes, and that will be permanently price-restricted, to eliminate future housing speculation, and to maintain our housing stock as a resource available to house people, and not as a commodity in which the wealthiest people can invest and speculate.
A "Marshall Plan" for housing would actually work. The housing produced would not be for "the market," but for those persons who can't compete in the market to obtain housing they can afford. The Chronicle spoke better than it knew, since the paper has consistently backed the "free market" approach to housing affordability - a strategy that actually did work in the 1940s and 1950s, when wealth inequality had not yet hollowed out the so-called "middle class." Today, the "market" approach has demonstrably failed to provide adequate new affordable housing.
A new "Marshall Plan" for affordable housing is exactly the right prescription, and if Governor Newsom is willing to "act boldly," as the Chronicle urges him to do, he should be using state resources (and every bit of federal resources he can manage to acquire) to build housing that will be rented or sold only to average or below average income persons - and that will be permanently price-restricted to keep it that way.
Image Credit:
https://www.sfchronicle.com/opinion/editorials/article/Editorial-Did-Gavin-Newson-survive-recall-too-16461328.php