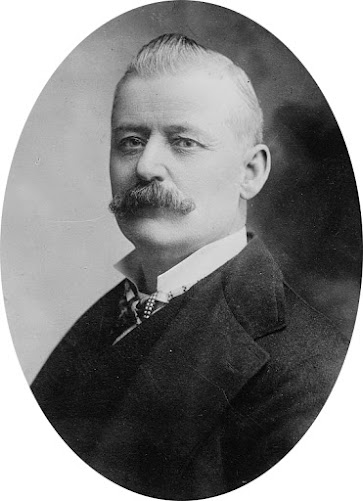 A July 13, 2021, editorial in The Wall Street Journal put me in mind of George Washington Plunkitt. Plunkitt is pictured above. The editorial was titled, "The Meaning of Biden's Firing Spree."
The specific "firing" to which The Journal directed its attention was the firing of Social Security Administration Commissioner Andrew Saul, who was appointed by former President Trump in 2019, and whose six-year term as the head of the Social Security Administration wouldn't have expired until 2025.
I read about Plunkitt when I was in college, in a book titled, "Plunkitt of Tammany Hall." The book I read (I still have it) was published in 1963, but its contents are contemporary with Plunkitt himself. Plunkitt was a proponent of "Honest Graft," and the book is subtitled, "A series of very plain talks on very practical politics, delivered by ex-senator George Washington Plunkitt, the Tammany philosopher, from his rostrum - the New York County Court House bootblack stand." These talks were "recorded by William L. Riordon," so the advice contained within the book really does come directly from Plunkitt himself.
Among Plunkitt's speeches, faithfully recorded, was a speech on "The Curse of Civil Service Reform," which Plunkitt labeled "the biggest fraud of the age," and "the curse of the nation."
Plunkitt's point is worth considering. The book was assigned reading in college for a reason. In essence, Plunkitt's argument is this: when a political party wins political office, it can accomplish what it promised the voters only if it can, itself, name the agents who will carry out the policies advocated for in the campaign leading up to the election.
President Biden and the Democratic Party did a lot of promising about Social Security during the 2020 election, and President Biden won. Suggesting that Social Security officials named by the former president, the president who ran and lost, should be in charge of the Social Security System, rather than a person appointed by the president who got elected, does tend to defeat the idea that a democratic election is supposed to mean something.
Think about it. Insulating governmental officials from "politics" does not, really, improve the ability of our democratic system to deliver for the people. As it turns out, and as The Wall Street Journal notes, the United States Supreme Court is of similar mind. In Seila Law v. CFPB, a 2020 decision, the Supreme Court held that President Trump could fire the head of the Consumer Financial Protection Bureau. The Court also held, in Collins v. Yellen, a 2021 decision, that the president could fire the head of the Federal Housing Finance Agency.
George Washington Plunkitt would be gratified!
I think we should be, too.
Image Credit:
https://en.wikipedia.org/wiki/George_W._Plunkitt