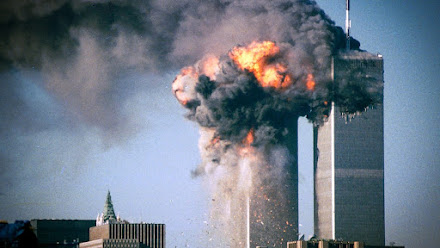 On Saturday, the newspapers all had articles and editorial statements reflecting on the 9/11 attacks. In my own blog posting on that day, I referenced them, too. September 11, 2021, was the twentieth anniversary of 9/11, and so retrospective looks at what had happened that day (and what has happened since) were certainly topical and appropriate.
I was particularly touched by a column that ran on the opinion pages of The New York Times. In his article, "I Wrote the Lead Times Article on 9/11. Here's What Still Grips Me," Serge Schmemann revisited a set of seventy-seven poems that were sent to him shortly after the attacks of September 11, by an English teacher in central Washington, who had assigned her eighth and ninth graders to write poems about 9/11, using Schmemann's article as the basis for their reflections.
I was not, on the other hand, much moved by what Dean Rotbart had to say in The Wall Street Journal. Rotbart is a former reporter for the Journal, and the author of a recently-published book, September Twelfth: An American Comeback Story.
Rotbart's article in the Journal was titled, "How The Wall Street Journal Published on 9/11." The article, itself, was actually fine. What I did not appreciate was what journalists call the "lede." Here it is:

It will happen again. Though few of us want to admit it, the 9/11 terrorist attacks are destined to be repeated, probably amplified, at some point. There is no scale to measure the degree of human suffering that follows such events. We can’t change history or prevent the inevitable sequels.

Spare me, please (spare us!) the idea that history is driven by "inevitabilities." Everything is "possible" and nothing is "inevitable." The good. The bad. The ugly. The greatest of triumphs. The most abject of failures.
Let us not agree with the idea that another 9/11 (an even worse one) is somehow "inevitable."
Let us, instead, change the world so that never happens again.
That's what we should have been reflecting upon on 9/11 this year!
Image Credit:
https://www.abc.net.au/news/2021-09-10/how-the-design-of-the-twin-towers-made-evacuation-hard/100436856