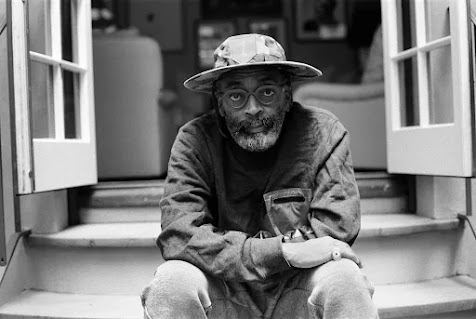 Back in August, The New York Times published an interview with filmmaker Spike Lee, who is pictured above. Reggie Ugwu, pop culture commentator for The Times, was the interviewer. His questions centered on Lee's eight-hour docuseries on HBO, "New York Epicenters: 9/11-2021 1/2." The first installment of Lee's latest work premiered on August 22, 2021. I gather that the series, based on interviews with over two hundred people, draws lessons from both the attacks on 9/11 and the recent pandemic.
I was most intrigued by one of the topics explored by Ugwu, and by Lee's response:

The last episode of the series devotes a lot of time to questioning how and why the towers fell. You interview several members of the conspiracy group Architects and Engineers for 9/11 Truth. Why did you want to include their perspective?

Because I still don’t … I mean, I got questions. And I hope that maybe the legacy of this documentary is that Congress holds a hearing, a congressional hearing about 9/11.

You don’t buy the official explanations?

The amount of heat that it takes to make steel melt, that temperature’s not reached. And then the juxtaposition of the way Building 7 fell to the ground — when you put it next to other building collapses that were demolitions, it’s like you’re looking at the same thing. But people going to make up their own mind. My approach is put the information in the movie and let people decide for themselves. I respect the intelligence of the audience.

Several days after running the article just quoted, The Times published an article with this headline: "Lee Re-edits Series That Features 9/11 Conspiracists." It appears that consternation about the exchange reported above led Lee to modify his "Final Cut." Ultimately, as The Times reported another few days later, Lee deleted thirty minutes of the original segment, completely cutting out any reference to the possibility that the official explanation for the collapse of the towers at the World Trade Center might not have told the whole story. All those "questions" never got asked - not within Lee's docuseries, at any rate.
I don't have a real "conclusion" about the questions initially raised by Lee (and then not raised by Lee). At least not one I would want to vouch for with any "certainty," any more than Lee apparently wants to vouch for the idea that the Twin Towers attacks were something significantly different from what has been presented as the official explanation. I guess it would be fair to say that I am not sure exactly what I think. I am definitely not surprised, though, at Lee's first reaction to the official explanations for what happened at the World Trade Center on September 11, 2001. I am not surprised that Spike Lee had some questions.
To tell the truth, I still have questions about what happened in Dallas, Texas on November 22, 1963.
Spike Lee's got questions about 9/11. Bob Dylan has questions about the assassination of President Kennedy.
Lots of people have lots of questions. Looks like I'm not the only one!
If you don't have any questions about 9/11, you might want to take a look at the following video, sent to me by a Facebook Friend. "Explained" isn't exactly the right word, here. Just questions; that's about as far as anyone can really go.
Image Credit:
https://www.gapatton.net/2021/08/236-us-lost-another-war.html