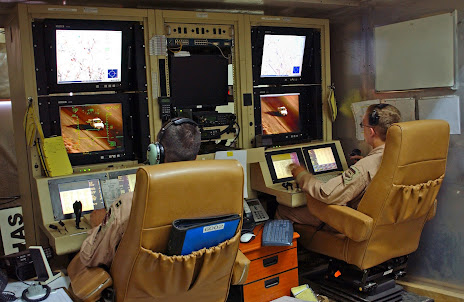 The picture above shows U.S. personnel operating killer drones. The picture was appropriated from an article in Consortium News. The article was titled, "In Pre-Sentencing Letter, Drone Whistleblower Daniel Hale Says Crisis of Conscience Motivated Leak."
Perhaps I should have titled this blog posting, "Your Taxpayer Dollars At Work." That headline would also have fit. Hale is facing four years in prison because he "leaked" to the general public what drone operators do. This is pretty much the same kind of thing that Edward Snowden did when he "leaked" information to the public that proved the United States Government is spying on the telephone calls of every person in the country, without telling them about it.
The U.S. Government calls what Hale did (and what Snowden did) "espionage." In other words, the taxpaying citizens of the United States are not, according to their government, supposed to know what their government is doing in their name, and with their money. According to the government, U.S. citizens are just the same as hostile enemy powers, and those who tell us what our government is doing are just the same as foreign spies. This claim is being made even though those citizens, in what we call our "democracy," are actually supposed to be in charge of the government.
Pretty hard to be in charge of the government if you are not allowed to know what the government is doing, isn't it?
I recommend you read the article. Just click the link.
There is a responsible case to be made that many, if not most, of the drone killings carried out by our government, in our name and using our money, are better classified as "assassinations," or as "murder," rather than as "wartime operations."
To make up our own minds about this, we need to know the facts. And those who tell us the facts, and tell us about what's going on, are not foreign spies or enemy agents!
Image Credit:
https://www.blogger.com/blog/post/edit/3611639517962742486/2197949300767874890