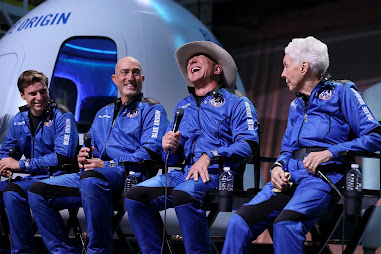 The Wall Street Journal is really big on private enterprise - and that includes lots of approval for the space conquering efforts of BB&M (Branson, Bezos, and Musk). In a column in the July 24-25, 2021, edition, a Journal columnist compared those three billionaires to the Vikings. Favorably, let me assure you!
What really got me going, though, was another column in the same edition of The Wall Street Journal by Holman W. Jenkins, Jr. He writes a "Business World" column on a regular basis, and the column I am thinking of was titled, "Why Space Tourism? Because It Operates outside of NASA."
If you detect echoes of Ronald Reagan's famous pronouncement, "Government is not the solution to our problem, government is the problem," I think you are getting to the essence of Jenkins' message: Government can't do anything right, and shouldn't even try. Thank God for the entrepreneurs!
These sentiments, though, weren't what drew my attention to Jenkins' column. A bias that is big on private enterprise, coupled with "down with the government" sentiments, is the daily bread of Journal readers. I, personally, subscribe to the paper on the Covid-19 vaccination principle: by giving myself a mild exposure to a deadly anti-government hysteria, I ward off a serious reaction to my own observations of government incompetence and wrong-headedness.  You can check yesterday's blog posting for an example of the kind of state and federal wrong-headedness that I am talking about.
No, it wasn't the typical anti-government diatribe that got my attention in Jenkins' column. It was this statement:

A mammalian species lasts only about two million years in the fossil record. One thing we know is that a species tied to one planet is guaranteed to fail eventually.

Think about that one for awhile! Let's assume that the archeologists have, indeed, found examples of mammalian species that have lived for two million years before becoming extinct. Our own brand, homo sapiens, has only been around for about 300,000 years, and if we hope to last for another 1,700,000 years we're going to have to make some changes pretty quickly. Changes, let me say, that focus on how we treat our existence on this planet.
So what does space have to do with it? Where does Jenkins get that "one thing we know" statement, claiming that "a species tied to one planet is guaranteed to fail eventually." Does he know something about other species, not "tied to one planet," that have managed to survive for more than 2,000,000 years? Is he in touch with those UFOs that the government is now saying seem to be buzzing around our skies with fair frequency?
The "one thing we know" - the one thing that we ACTUALLY know - is that the only life of any kind that we have ever observed inhabits our own planet, Planet Earth, and that there isn't any other place to go. Not that we know of, at any rate! If Jenkins has information to the contrary, not available to everyone else in the world, now would be a good time to be forthcoming about it.
And if he doesn't? Well, the "one thing we know" - that we ACTUALLY know - is that we need to learn how to live on Earth, together, and with all the other species who live here, and within the limits of this planet.
That's it, folks. One planet, our planet, is all we've got, and it's a pretty nice place to live, too.
Let's keep it that way! 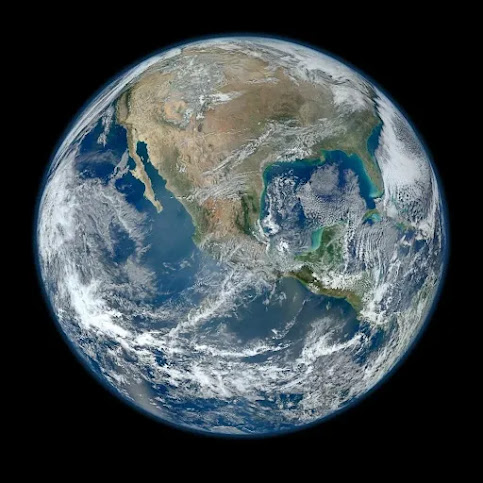