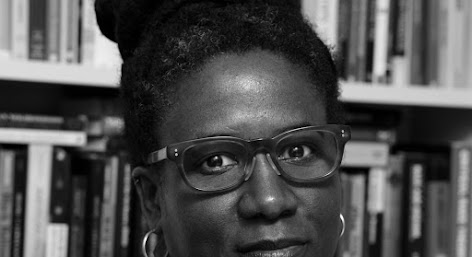 Stacey Sutton, pictured above, is an Associate Professor of Urban Planning and Policy at the University of Illinois, Chicago. The August 2021, edition of In These Times featured an editorial statement by Dr. Sutton, which I have reproduced below. Among other things, Sutton wrote this:

All the stimulus packages, from the first (under former President Donald Trump) to the most recent (Biden’s American Rescue Plan), have one thing in common: They attempt to restore the order that created the problem in the first place. Corporate capitalism’s disregard for the needs of workers, families and communities — along with its contempt for regulatory and ecological boundaries — undergirds our current crises in healthcare, housing, finance and debt.

I'll let you read the entire statement yourself. My comment today, though, is pretty simple: What Stacey said!
oooOOOooo

President Joe Biden’s stimulus packages do not fulfill his promise to ​“build back better.” We must demand more.

All the stimulus packages, from the first (under former President Donald Trump) to the most recent (Biden’s American Rescue Plan), have one thing in common: They attempt to restore the order that created the problem in the first place.Corporate capitalism’s disregard for the needs of workers, families and communities — along with its contempt for regulatory and ecological boundaries — undergirds our current crises in healthcare, housing, finance and debt.

We cannot expect to get out of this mess by injecting public stimulus dollars into the current undemocratic, unregulated and destructive political-economic system. Reopening the system is not reparative; we learned as much in 2008 when banks and corporations got bailouts while low-income and poor people of color got foreclosure, bankruptcy and more debt.

Truly building back better would require building an equitable, socially just, ecologically sustainable and democratic economy that is of, by and for the people.

What would a stimulus package constructed from these building blocks look like?

We could follow an example from North Dakota and create public banks that are funded with taxpayers’ money and serve as public trusts. Economic stimulus and relief funds could be transferred from the U.S. Treasury directly into these public banks, which are able to make loans at lower interest rates (because their goal is not simply to maximize profits), which translates into more money for public projects.

We could also take our cue from Brazil’s Partido dos Trabalhadores (Workers’ Party) and develop participatory budgeting, a grassroots and democratic process of decision-making to determine how public funds should be used. As a form of direct democracy, participatory budgeting has radical potential for establishing transparent, equitable and community-led spending. Compulsory participatory budgeting with funds from public coffers (e.g., federal stimulus packages), could sensibly bolster and build local physical and social infrastructure, from community block clubs and neighborhood councils to alternatives to policing, holistic community healthcare, youth development programs and resources for seniors. The cultural problem of equating democracy with electoral politics — rather than participatory democracy — would have to be overcome. A good introduction to participatory democracy might be through community-controlled investment funds. Through deliberative processes (such as people’s assemblies), community residents could collectively decide their needs and provide the resources needed to manifest the desired changes.

The burden of corporate capitalism’s successive crises is disproportionately borne by care workers (the majority of whom are women of color), nonunionized service workers, gig workers and informal workers. We should be supporting worker-owned cooperatives, which are democratically owned and controlled by the workers. Typically, they generate living wage jobs and are more sustainable and more embedded in communities.

Rather than perpetuating these cycles of economic disaster, real stimulus and relief — invested in public infrastructure — could create multiplier effects that redound to the public’s good.