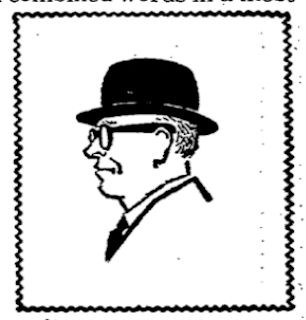 For many years, the "Fearless Spectator," pictured above, wrote a much-beloved column for the San Francisco Chronicle. The actual name of the "Fearless Spectator" was Charles McCabe. I read McCabe's columns assiduously during my youth, though I can't remember any specific column right now. A lot of McCabe's columns revolved around overindulgence in the consumption of alcoholic beverages - something outside the range of my personal experience. I also recall that McCabe periodically sounded off on the fact that the companies that make safety razors go out of their way to make sure that their blades wear out much faster than they should. This is a sentiment I came to share, later, when I started shaving myself.
Of course, there were some other beloved columnists at the Chronicle, too, specifically Herb Caen and Art Hoppe. Frankly, I think that Caen and Hoppe were much more beloved than McCabe, who was properly thought to be a curmudgeon. Much later, of course, there was Jon Carroll, who replaced McCabe when McCabe retired. I am amazed and distressed to find that Carroll, now also retired, seems to have disappeared from public view in 2018 (and thus from the radar screen of my consciousness, though he was near the center for so long)!
You might well ask yourself what prompted me to be thinking about Charles McCabe, here in 2021, when McCabe has been dead for thirty-eight years, and when I have long since become reconciled to the fact that my razor blades simply will get dull too quickly, whether I fret about that or not.
Actually, I wasn't thinking about McCabe, particularly, as I sat down to write this blog posting. Instead, I was thinking about that "Fearless Spectator" title. Once in a while, against my better judgment, and contrary to my personal inclinations, I find myself plunged into a kind of deep and depressive introspection. Actually, I don't think that is too unusual. Don't we all, sometimes, become preoccupied with questions like these: Who am I, and what am I doing here? For me, that sort of question makes me wonder if I am just standing around and watching the world go smash.
I hope not, but I have concluded, if I am going to be a "spectator," that I at least want to be a fearless one. But what I really want to be is a fearless "actor."
We do observe the world, as spectators, but that is only one of the things we do - or that we can do, anyway. Besides observing the world, we can also take action to change it.
"Fearless" we need to be on both accounts!
Image Credit:
http://jfk.hood.edu/Collection/White%20Materials/Watergate/Watergate%20Items%2007349%20to%2007667/Watergate%2007386.pdf