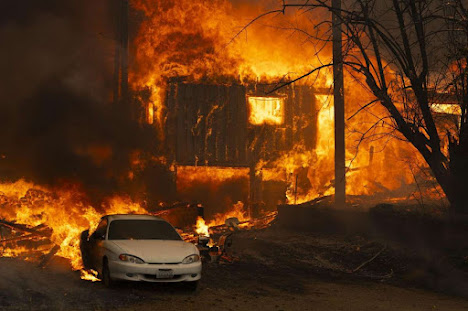 Alison Cordova has written a powerful indictment of Pacific Gas & Electric Company, an investor owned utility that provides gas and electric service to 5.2 million households in Northern California. Cordova's statement appeared at the top of the editorial page in the August 12, 2021, edition of the San Francisco Chronicle and is titled, "Dixie Fire and PG&E negligence." If you can evade the Chronicle's paywall (which may or may not be possible for non-subscribers), you can read what Cordova wrote by clicking this link. The picture, above, came with the editorial.
Cordova was previously a partner at the Cotchett, Pitre & McCarthy law firm and was part of lead counsel that took on PG&E for the 2015 Butte Fire, the 2017 North Bay Fires, and the 2018 Camp Fire. She is not listed as having anything to do with the 2011 San Bruno gas explosion, caused by PG&E negligence. The San Bruno PG&E pipeline failure resulted in eight deaths and massive property damage. The picture of the Dixie Fire, above, seems to show a minor blaze, in comparison with what happened in San Bruno. There, eyewitnesses reported that the initial blast "shot a fireball more than 1,000 feet in the air," and the explosion caused a measurable earthquake.
Here is a sample of Cordova's damning analysis of how PG&E's failure to exercise reasonable oversight led to what is now the second-largest wildfire in California history, a fire that is still uncontained:

PG&E operates 63 hydroelectric facilities in Tier 2 and Tier 3 high fire threat areas, know as “HFTD’s.” Twenty-four of its facilities are in Tier 3, which is the highest fire risk zone possible. “The Rock Creek-Cresta Hydroelectric Project” consists of the Rock Creek and Cresta reservoirs, dams and powerhouses. Cresta is one of PG&E’s Tier 3 hydroelectric facilities. That means it should have been a top priority for enhanced wildfire mitigation inspections, especially in the run-up to fire season. Not to mention, Cresta’s facilities are located in the Feather River Canyon — the same region where the deadly 2018 Camp Fire started.

In the months leading up to the Dixie Fire, however, PG&E wrote a letter to the CPUC admitting that it had “discovered” a mistake in its 2020 Wildfire Mitigation Plan: It had forgotten to include its hydroelectric substations.

Despite its outrageous record of malfeasance, PG&E continues to be in charge of the gas and electric systems that provide electricity to millions of California residents. Cordova's editorial column makes a very good case that PG&E should be relieved of that responsibility - and at the earliest moment possible.
I believe that California should now require the transformation of PG&E into what might be called a "consumer cooperative." The customers - the California residents who rely on the system - should actually be in charge of the system.
If that were true, we could have an electric utility that would put the interests of its customers first, instead of pursuing profit over safety. I have called PG&E "Pathetic Grift & Entitlement" for a pretty good reason. A cooperative gas and electric utility would provide better service, and greater safety, at a lesser price than an investor owned utility that is structurally required to put its profits first.
I grew up in Palo Alto - where electricity was provided by a city-owned and managed municipal utility, not a for-profit corporation. We need to reconfigure our electric and gas systems in their entirety, eliminating the "gas" part, as soon as we can, and structuring our electric service to a system based on what some call "microgrids." We need local self-sufficiency, and to maximize solar power on every rooftop, parking lot, and other urban location where solar electricity can be installed.
Maybe, after the current recall, our Governor can turn his attention to that challenge!
Image Credit:
https://www.sfchronicle.com/opinion/openforum/article/Here-s-how-PG-E-negligence-almost-certainly-led-16380824.php