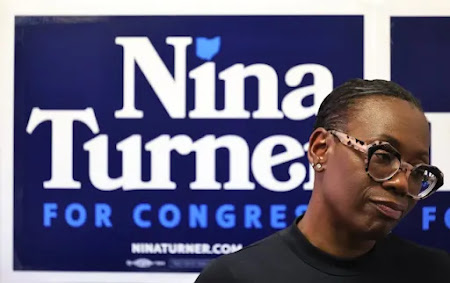 Nina Turner lost her campaign for Congress. The Ohio district in which she ran was a strongly Democratic Party district. Turner was the "progressive" candidate. Another person of color, Shontel Brown, won the race. Brown was the more "moderate" Democrat, backed by Hillary Clinton, among others.
The most common reaction to the victory of Shontel Brown over Nina Turner has been that the Democratic Party majority is a "moderate" political party, not a "progressive" political party. After all, our president is named Joe Biden, not Bernie Sanders.
There is undoubtedly some truth to this, but I appreciated an article in The Nation, online, that proposed a somewhat different analysis:

Nina Turner has been criticized for a lot of things in the wake of her loss in the Cleveland, Ohio, special election last week. The conventional wisdom is that her politics were too leftist, and that she was too confrontational, to win in a time when Biden-like moderate politics are the order of the day. Those takes are nonsense; the race was eminently winnable. If there is a single critical mistake Turner made, it was placing her campaign in the hands of strategists who squandered her financial firepower on ineffective and ill-conceived expenditures.

Steve Phillips, who wrote the article for The Nation, is the host of "Democracy in Color with Steve Phillips." This is a "color-conscious podcast about politics." Phillips is also a senior fellow at the Center for American Progress and is the author of Brown Is the New White: How the Demographic Revolution Has Created a New American Majority.
Phillips says, pretty much, that what Turner needed to do (and what her campaign didn't do) was to employ an approach discussed in my blog posting yesterday. The campaign needed to talk to the voters, one on one, "one conversation at a time."
Here is Phillips' pitch:

Looking through Turner’s spending reports, it’s clear that the people who ran her campaign defaulted to the typical playbook of putting far more money into television and digital ads than into the nitty-gritty work of getting people to cast ballots.

This strategic blunder is especially egregious because the formula for winning special elections, which are typically low-turnout affairs, is to focus on that humble work. That’s how Alexandria Ocasio-Cortez prevailed in her 2018 upset win. Her communications coordinator, Corbin Trent, explained that their campaign strategy identified a universe of 75,000 potential supporters, and “then we knocked on their doors, we sent them mail, we knocked on their doors again, we called them.”

That is the path to victory—knocking on doors, calling people, identifying supporters, and then getting those supporters to the polls. It is simple in concept, yet challenging in execution. And it is made more challenging to pull off in the realm of professional politics, because it is meticulous, nonglamorous, and not profitable for consultants.

I am not planning to give up on my idea that "talking to strangers" is exactly what we need to do to preserve American democracy and to save the world.
A modest ambition, I know, but consider the alternatives!
Image Credit:
https://www.thenation.com/article/politics/nina-turner-ohio-special-election/