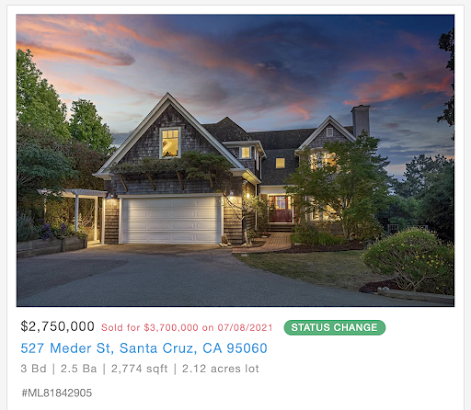 Just in case you haven't been following the Santa Cruz real estate market, most listed properties seem now to be selling for significantly more than the asking price. Generally, as I have been eyeballing the sales as they come in, buyers seem to be paying something like $200,000 to $250,000 more than the asking price - no matter what that asking price is (and almost always the asking price is pretty close to, or above, $1,000,000).
The report pictured above, documenting a sale made one month ago, pretty much took my breath away. I don't mean that as a positive comment, either. The buyer essentially paid the seller $1,000,000 more than the seller's asking price, which was already almost three million dollars.
When I saw that report, a line from Bob Dylan's song, "It’s Alright, Ma (I’m Only Bleeding)," appeared unbidden in my mind:

While money doesn’t talk, it swears

We can't solve our housing crisis at the City or County level. Actually, not even at the state level. We need major new initiatives at the national level, and I think they are going to have to include not only significantly increased taxes on those at the upper levels of wealth and income (that 1% group - the folks who can afford to bid up the price of a house by $1,000,000), plus requirements that the giant corporations that create jobs (I am talking about Facebook, and Google, and Netflix in our region) create the housing to go along with those new jobs, and that all housing, in the future, should be sold with permanent resale restrictions, so that when you buy a house (for whatever price you buy it for) you can't sell it for more than that amount, plus actual inflation.
Housing price increases should be tied to inflation, not speculation.
If we think ordinary working families need to be housed in decent accommodations, close to where they work (and not in tents and vans), then letting developers build a slew of "market-rate" housing, with just a very few "affordable" units, is not going to be sufficient - as it already isn't.
We need to make sure that housing is for housing people, and is not the field in which speculative financial gains keep driving prices beyond the ability of ordinary working people to rent or buy.
Image Credit:
https://www.realtor.com/realestateagents/brenda-mee_santa-cruz_ca_1833143_945599963