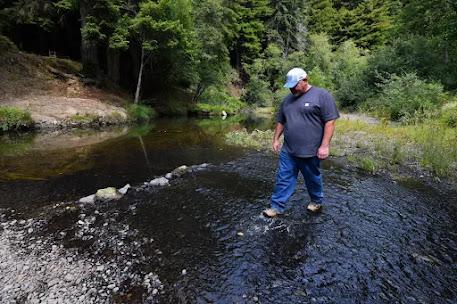 There was a pretty scary front page headline in The Santa Cruz Sentinel on Sunday, August 1, 2021. It read as follows: "Communities Facing Risk of Running Out Of Water." Paul Rogers, a reporter for the San Jose Mercury News, wrote the article to which this headline was attached. Rogers reported that the state is putting together a list of which of the state's 7,500 public water systems are facing the most severe shortages, and said that at least eighty-one water systems are currently on the list. By the end of August, 132,559 people in the state may have little to no water at all. A later article by Paul Rogers notes that Santa Clara County residents are falling "far short" of conservation targets.
Inside that same, August 1st edition of the Sentinel, on Page B1, Gary Griggs, Director of Marine Science at the University of California, Santa Cruz, wrote a column with the following headline: "Water Remains An Issue That Divides Us." It does, indeed! Griggs indicated in his column that he intends, always, to "educate," not "advocate," but the column itself makes a pretty good case for desalination, and doesn't really highlight too many downsides. A subsequent column by Griggs provides additional pro-desalination analysis.
There are some downsides, of course, says Griggs - basically three: (1) Cost; (2) Energy Use, and (3) Impacts on the Marine Environment. Griggs spoke to "Cost" in his August 1st column, definitely admitting that desalinated water would cost more - and actually a lot more. Nonetheless, while he did say that cost might be a problem, Griggs estimated that the increased cost of water from a $1 billion desalination plant constructed near San Diego will only be about $7/month for the typical user, "less than the cost of a couple of lattes."
Griggs did not note that there are about 3,300,000 people living in San Diego County, who could potentially split the cost of that new desalination plant, and that Santa Cruz County has a population of fewer than 275,000. Paying for a desalination plant here might cost quite a few more lattes per person than such a plant would cost in San Diego. In fact, that two lattes per month cost estimate is not universally accepted as accurate. For those interested in reading an argument against desalination, based on cost, the article linked right here might be of interest. Admittedly, the statements quoted are coming from the Desal Response Group, which is willing to admit that it is an "advocacy" group, and which doesn't pretend to be purely "educational."
My reaction to the argument for desal, as presented by Griggs, is that it is emblematic of where human society has gone fundamentally wrong. Somehow, we continually fail to recognize that the Natural World is a "limited" world, and that we need to design our own world to conform to the limits imposed by Nature.
Griggs touts the 332 cubic miles of the Pacific Ocean, saying that this is "a source of water that we will always have available to us." Our planet seemed pretty vast, too, about 150 years ago, as we began tapping, big time, into fossil energy. Our decision to make use of all the energy resources that we discovered is now driving millions of species to extinction, and is making our own survival perilous. There was, in fact, another column in The Sentinel on Sunday, August 1st, spotlighting the climate crisis: "We Must All Address Climate Change." The way we need to address that crisis is not by adding new energy; we need to use less energy, and we really need completely to eliminate our use of hydrocarbon combustion to drive our society and economy.
I am in favor of addressing resource limitations - including water scarcity - by figuring out how to live with what we have, instead of always wanting more, more, more!
________________________________________
Quotation:
See "The Rime of The Ancient Mariner," by Samuel Taylor Coleridge: "Water, water everywhere, nor any drop to drink."
Image Credit:
https://www.santacruzsentinel.com/2021/07/31/california-drought-dozens-of-communities-are-at-risk-of-running-out-of-water/