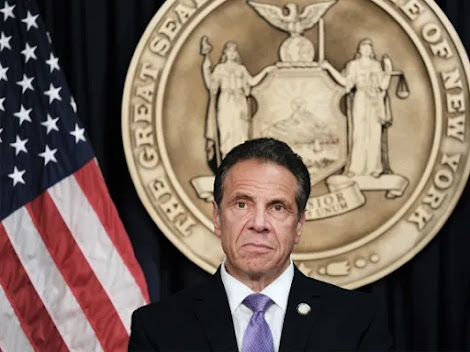 Elizabeth Spiers' column in the August 8, 2021, edition of The New York Times is titled, "How Cuomo Nearly Got Away With It." For those not following this story, Andrew Cuomo, Governor of New York, pictured above, is accused of sexual harassment (plus being, generally, an overbearing and unsympathetic human being). A comprehensive investigative report, undertaken at Cuomo's own request by the New York State Attorney General, has substantiated the sexual harassment accusations against Cuomo, and has documented a pattern and practice of sexual predation on his part. The report also confirms that Cuomo is an overbearing and unsympathetic human being.
If Cuomo doesn't soon resign, he will likely be impeached. That's the prediction, anyway, and lots of people have called for his resignation, including the President of the United States. However, neither a resignation nor an impeachment has yet occurred. Thus, The Times' headline seems just a bit premature.
Spiers, the author of the column, is described by The Times as a "Democratic digital strategist." Wikipedia reveals that Spiers was also the founding editor of Gawker, a Manhattan-based gossip blog that was driven into bankruptcy "as a direct result of the monetary judgment against it related to the Hulk Hogan sex tape lawsuit." This lawsuit, brought against Gawker, "was bankrolled by the billionaire investor Peter Thiel who held a deep grudge against Gawker for outing him" as gay. Spiers, in other words, definitely knows how much the public enjoys and revels in salacious gossip about prominent people. This is of course, not news.
My commentary in this blog posting is motivated not really by the salacious gossip about Cuomo (although that is interesting). Rather, I was struck by one phrase that Spiers uses as she discusses Cuomo's situation:

All of these things have given people around Mr. Cuomo — and often, the general public — a sense that he operates like a macho Machiavelli who views other people as instruments for accumulating power and that he believes he is entitled to that power regardless of what the public thinks or wants. It is his political birthright, and public service appears to be a secondary consideration (emphasis added).

While she doesn't say so directly, Spiers seems to imply that if Governor Cuomo's primary motivation had been "public service" that might have provided at least some excuse for a number of the sins of which he is accused. I would like to take exception to the idea that politicians who say their goal is to pursue "public service" are the right kind of politicians, the kind we ought to be trying to elect. I would like to advance the idea that when any politician suggests that his or her motivation in doing the job is somehow related to a commitment to "public service" the public should be immediately suspicious of that politician.
You do hear that a lot - that thing about politicians having dedicated their lives to "public service." I think it is a bogus claim. It is a claim that is intended to distract. Many politicians are in it for the power, the glory, the money (and the sex), and that is one extremely good reason that so many members of the public don't have a high opinion of politicians.
But aren't there some good politicians? Absolutely! Maybe even more than the other kind. The good ones, however, don't claim that "public service" is their life's goal. I was a politician for twenty years (at the local level, admittedly), and I would never have said that I did that job because I was dedicated to "public service."
Why then did I do the job? Why was I a politician?
I was a politician because I was supported by and represented members of the public who wanted to achieve a certain kind of public policy objective. While I voted on hundreds of items each week, and had general responsibility for the conduct of Santa Cruz County government, I was first elected (and then re-elected four more times) because of my commitment to controlling and managing growth in Santa Cruz County, and because I wanted to provide local resources (money) for community-based human service programs. More than a majority of the people who could vote for me supported those objectives. I was a politician because I, like those who voted for me, wanted to have our local government deal, successfully, with those two issues - growth management and environmental protection, and a commitment to community-based human service work. The other things I did were part of my responsibility as an elected official, but the reason I ran for office (and was elected five times) was because I wanted to advance a specific political agenda, and the majority of the voters in the Third Supervisorial District in Santa Cruz County wanted that, too. That is, in fact, "the way it's spozed to be."
Let's start understanding "government" for what it really is, and not try to idealize politics as some kind of general pursuit of "public service." Politics is our way of deciding (among many alternatives) what we, collectively, will do about key issues of concern. Individuals who get involved in government - and we do call them "politicians" - should be there to accomplish particular public policy objectives. If a politician says something else, be careful. "Public service" is an "all things to all people" kind of phrase. The voters should not be looking for some general statement about devotion to "public service." The voters should be asking themselves what is this person, this politician, actually going to try to do, specifically!
Any statement by a politician that he or she is devoted to a "life of public service" is almost always meant to district the voters. When you hear a politician say that, my advice is to run the other way (and to find someone to support who wants to advance the political agenda to which you are dedicated).
Politicians who say they are seeking office, or are in office, because of their dedication to a life of "public service" are probably in it for the power, the glory, and the money (and the sex).
My opinion - but an informed one!
Image Credit:
https://fivethirtyeight.com/features/will-andrew-cuomo-resign/