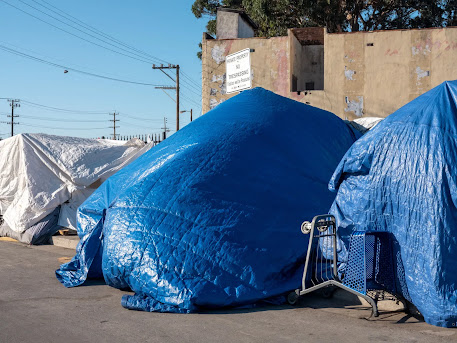 Online, the opinion column from which this picture came is titled, "It’s Hard to Have Faith in a State That Can’t Even House Its People." In the hard copy version of the column, which appeared on the editorial page of The New York Times on July 30, 2021, the headline was a bit more upbeat: "California Can Solve Its Homelessness Crisis."
I was pleased that Ned Resnikoff, the author of the column and the policy manager for the Benioff Homelessness and Housing Initiative at the University of California, San Francisco, didn't call out so-called NIMBYs, and their supposed opposition to new housing developments, as the sole or major cause of the the state's homelessness problems. Resnikoff's column included the following observation, which I think is right on target:

As economic inequality has threatened the nation’s political system, it has most likely worsened homelessness in California. In a recent paper, researchers presented evidence that income inequality may fuel homelessness in regions where housing supply fails to keep up with demand. The authors theorized that this may be because the wealthiest households in an unequal city bid up the cost of housing for everyone else, making it increasingly unaffordable to lower-income residents.

This appears to be exactly what happened here the Bay Area, where the unfathomable wealth generated by the tech boom has been mostly captured by those at the top of the income distribution. Because Bay Area cities have failed to produce enough supply to keep up with population increases, lower and middle-income residents now have to compete for housing with the super-wealthy, whose ability to outbid everyone else continually forces prices up (emphasis added).

In order to deal with our homelessness crisis, we (collectively) have to deal with our crisis of "wealth inequality," and provide housing (both rental and for-sale housing) at prices that average and below-average income persons can afford. Simply building "more" housing doesn't solve the problem, because if we are looking for "the market" to provide housing, we will never be able to build enough housing to meet genuine community needs at the lower end of the income scale.
In our current capitalistic system, a "market-based" approach to providing necessary housing will never succeed, since the whole purpose of the market it to make sure that sellers of goods and services get the highest prices that purchasers are willing to pay. When there are lots of people with the economic ability to buy housing (a very scarce commodity) those people will end up owning or renting what's available. Those with lower incomes will lose out. There is no "market" solution to our housing crisis.
There are, however, two or three ideas that could help address the problem:
There are, undoubtedly, other things that we could do (collectively) to provide adequate housing. Spending public money to provide housing to those who need it is an obvious example of a very simple solution to the housing crisis. Publicly-produced or subsidized housing, sold into the private market with resale restrictions, as discussed above, could directly deal with the problem. That would take a lot of money, of course, to provide the amount of housing that is needed, but I'm with Resnikoff (in the hopeful headline version of his column): California Can Solve Its Homelessness Crisis.
We would have to spend our own money to do it, and that would mean higher taxes on those with higher incomes. That's where we would get the money to spend. California could do that, and so could the federal government. Higher taxes on upper income people would mean less consumption by those upper-income people, whose money would have been committed to address the homelessness problem.
The extremely wealthy wouldn't like that, of course, but Resnikoff is right. We can solve the problem. The question is whether we will!
Image Credit:
https://www.nytimes.com/2021/07/26/opinion/homelessness-california.html