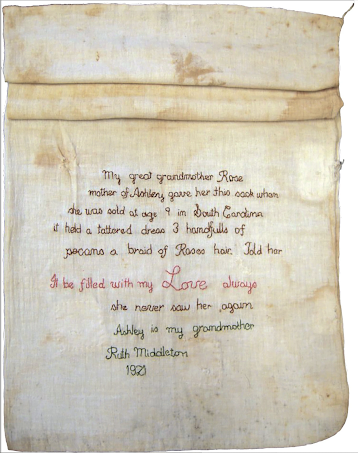 Today, as I often do, I comment on a book review. This review, by Jennifer Szalai, was published in The New York Times on June 9, 2021. The title of the review is "In One Modest Cotton Sack, a Remarkable Story of Slavery, Suffering, Love and Survival."
The book that is profiled was written by Tiya Miles, who is a history professor at Harvard. Miles' book is called All That She Carried.
All That She Carried is a book about women and chattel slavery, as framed by a single object: a cotton sack that dates back to the mid-19th century. The cotton sack was given by an enslaved woman named Rose to her daughter Ashley.
"Decades after this cotton sack was given to Ashley by her mother, Ashley’s granddaughter Ruth embroidered the sack with an inscription that announces its provenance."

My great grandmother Rose
mother of Ashley gave her this sack when
she was sold at age 9 in South Carolina
it held a tattered dress 3 handfulls of
pecans a braid of Roses hair. Told her
It be filled with my Love always
she never saw her again
Ashley is my grandmother

I burst into tears as I read this inscription: "She never saw her again."
Never. That little nine-year-old girl was torn away from her mother, and she never saw her mother again.
But Ashley, that little nine-year-old girl, never forgot that the cotton sack her mother gave her "be filled with my Love always."
So clear was Ashley about this - so true it was - that the story of this Love, first whispered into Ashley's ear in 1850 something. was vivid and alive in 1921, for Ruth. And after that, too.
The Love that Rose put into that cotton sack lives on still, embroidered onto it, the testimony of Ruth.
What parent does not appreciate what this means? And which one of us would seek to curtail the importance of what this story says? This is not only a story about the horrors of slavery -  horrors from which we have not yet fully escaped. It is that, of course, but it is more. At least I think so.
Rose is telling us something - telling Ashley, but telling us, too, as the story has come to us from Ruth. This is a remarkable story about Love. From generation to generation. From a parent to a child, and then to another, and then to another, and then to another ....
This is a story about our world. We can see it all around us. We can if we look. Like that modest cotton sack, this is a world that is filled with Love, handed down from generation to generation. We might think that this Love, because not immediately and directly visible, is not there at all. But it is there. We are sustained by Love that is undefeated and undiminished by time.
If nobody told us this before, let's learn it now, from Ruth, and Ashley, and Rose. This world - we shouldn't forget it - be filled with Love.
Always!
Image Credit:
https://www.nytimes.com/2021/06/09/books/review-all-that-she-carried-ashleys-sack-tiya-miles.html