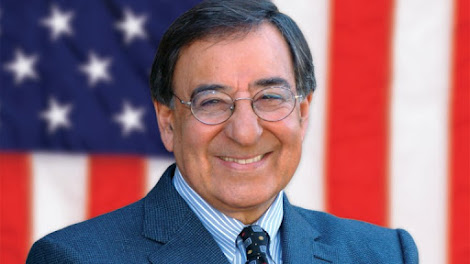 Leon E. Panetta is pictured above. At one time, Panetta worked for the Nixon Administration. Then, Panetta became the Member of Congress representing the part of Santa Cruz County in which I live. Then, Panetta was the Director of the Office of Management and Budget (OMB) under President Clinton. Then he was President Clinton's Chief of Staff. Then he was the head of the Central Intelligence Agency (CIA). Then he was the Secretary of Defense, holding both of these last positions under President Obama.
Currently, Leon Panetta is the Chairman of the Panetta Institute for Public Policy, which is based in Monterey County. Early this month, I received the latest issue of the Panetta Institute newsletter, Update, which reports that college students today are "resilient and optimistic about the future." That is definitely good news!
The latest Panetta Institute newsletter also has a "Message from the Chairman," headlined as follows:
We Cannot Afford To Take Our Democracy For Granted.
Here is how that Chairman's Message begins:

Over 245 years since our birth as a nation, we have experienced a number of significant threats to the survival of our democracy. We the people elect our leaders in the hope that they will have the strength and courage to confront crisis; make the tough decisions required; respect our rights, freedoms and values; and abide by their oath to preserve, protect and defend the Constitution.

While I am basically alright with most of this message, I do suggest that there is one word in it that is not, actually, quite the right word. That word is "leaders."
We elect "representatives," not "leaders." Some of our elected representatives may also be "leaders," or may turn out to be "leaders," but there is no guarantee of that, and it is particularly important that our representatives don't get the idea that since they were elected they, therefore, have a mandate to "lead" us, and to tell us what we need to do.
The mandate is to represent us. That's what our elected representatives are supposed to do.
If we truly care about democracy, we must get it into our heads that "we, the people" are, in actual truth, in charge of our government. We must truly internalize the fact that we are the government. Self-government means that we are in charge of our government ourselves.
When Abraham Lincoln said, at Gettysburg, that the Civil War had been fought to ensure that a government "of the people, by the people, [and] for the people, shall not perish from the earth," he absolutely got it right.
A democratic government must be "of the people." In other words, each one of us must be, ourselves, engaged, in some way, in the governing process.
A democratic government must be "by the people." In other words, the governmental decisions that will bind us must derive immediately from our own participation in government.
Finally, the government must be "for" the people - but the only way that can ever be true is if our government is both "of and by the people," first.
Electing "leaders" who hire people who tell us what we have to do, under penalty of prison, is not what "democracy" is all about.
Real democracy is a lot of hard work. By us!
"Leaders" are those who step to the front to make sure that our government is, truly, "representative," that our government is doing what the people want it to do.
Let's not get sloppy when we talk about democracy. And let's not get confused.
We don't elect "leaders," who then tell us where we ought to be going.
We elect representatives, and then tell them where we want to go.
If we're not doing it that way, it's no democracy!
Image Credit:
https://www.cnn.com/2013/02/25/us/leon-panetta-fast-facts/index.html