I was a locally-elected official for twenty years, having been elected five times to the Santa Cruz County Board of Supervisors. I was the statewide chairperson of the California Local Government Commission, and I helped form and lead an OCS Local Government Coordination Program that began in Santa Cruz County and that ultimately mobilized votes in Washington, D.C. that stopped new offshore oil drilling, nationwide, for twenty-seven years.*
Based on my personal experience, I have a great deal of confidence that local government officials can have an extremely important impact on issues of local, statewide, and even national importance. To provide some examples of what I mean, let me introduce you to a short article and to a very long book that support that thesis. They are both worth reading.
The shorter piece I am recommending is titled, "Lina Hidalgo's Political Rise." Click on that link and you will find yourself on The New Yorker website, where Stephania Taladrid's June 28, 2021, article tells how Lina Hidalgo, a thirty year old woman with no political experience, was elected as the Chief Executive of Houston, Texas in 2018. It's a fascinating and inspiring story - at least I think so.
Also fascinating and inspiring is Dennis Kucinich's recent book, The Division of Light and Power (picture below). Kucinich was elected as the Mayor of Cleveland in 1977 and sacrificed his office to prevent a corrupt business establishment from taking over the city's municipal power company. While Kucinich's book is long, at 659 pages, it has a lot of "narrative drive" and it didn't bog me down at all. A blurb on the cover, attributed to Geraldo Rivera, calls the book "a cross between The Godfather and Mr. Smith Goes to Washington."
The Houston Chronicle has apparently claimed that "Hidalgo puts principle over politics at her own peril."
The importance of standing up for principle against politics is the major theme of Kucinich's book.
To my mind, Hidalgo and Kucinich are both exemplary leaders - Local Leaders. And I want you to know that local leaders can make a real difference when they are committed to principle over politics.
Read all about it! 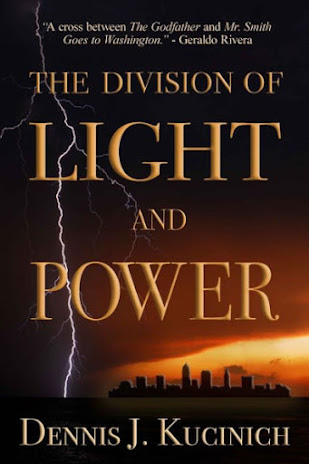