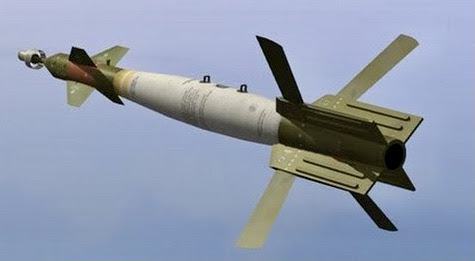 Pictured above is a laser-guided bomb. If you click this link, you can see a ten minute tutorial on how to launch a laser-guided bomb. Good luck with that! I didn't much understand any of the instructions, but I was suitably impressed with the destructive impact of the bomb once it was released.
You might wonder why I was scouting out how to launch a laser-guided bomb (LGB for short). Basically, I was following up on a recent article in Consortium News, which was titled, "Arms Sales: What Americans Know About Bombs Dropped in Our Name."
I knew nothing! But here is what I learned:

At some point before the summer of 2018, an arms deal from the U.S. to Saudi Arabia was sealed and delivered. A 227kg laser-guided bomb made by Lockheed Martin, one of many thousands, was part of that sale.

On Aug 9, 2018, one of those Lockheed Martin bombs was dropped on a school bus full of Yemeni children. They were on their way to a field trip when their lives came to a sudden end. Amidst shock and grief, their loved ones would learn that Lockheed Martin was responsible for creating the bomb that murdered their children....

While Lockheed Martin profited from the death of 40 Yemeni children that day, top United States weapons companies continue to sell weapons to repressive regimes around the world, killing countless more people in Palestine, Iraq, Afghanistan, Pakistan, and more. And in many cases, the United States public has no idea this is being done in our name to benefit the largest private companies in the world.

Now, the newest $735 million in precision-guided weapons that are being sold to Israel are destined to have a similar fate. The news about this sale broke in the midst of Israel’s most recent assault on Gaza that killed over 200 Palestinians. When Israel attacks Gaza, it does so with U.S.-made bombs and warplanes....

According to our own law, the United States should not be sending weapons to countries like Israel and Saudi Arabia (among others). Technically, doing so goes against the Foreign Assistance Act, which is one of the main laws governing weapons sales.

Section 502B of the Foreign Assistance Act says that weapons sold by the United States cannot be used for human rights violations. When Saudi Arabia dropped that Lockheed Martin bomb on those Yemeni kids, no argument could be made for “legitimate self defense.”

When the primary target of Saudi airstrikes in Yemen are weddings, funerals, schools, and residential neighborhoods in Sanaa, the United States has no legitimate justification for their use of U.S. manufactured weapons. When Israel uses Boeing joint direct attack munitions to level residential buildings and international media sites, they are not doing so out of “legitimate self defense.”

In this day and age where videos of U.S. allies committing war crimes are readily available on Twitter or Instagram, no one can claim that they don’t know what U.S.-made weapons are used for around the world.

The article in Consortium News spends a good bit of time discussing how arms sales might be disallowed on an individual basis. It is hard to do it that way, that's clear, so the article mentions how procedures might be changed, to let Members of Congress have a better chance to intervene to prevent individual arms sales.
Good idea, sure, but how about a more direct solution?
NO international arms sales, period. How's that for an idea?
Professing its commitment to peace (as the United States government so often does) is not really consistent with allowing American arms manufacturers to provide sophisticated weapons that end up blowing apart wedding, funerals, and school field trips.
NO international arms sales, period. Seems like a simple solution. I think I remember a Bob Dylan song about that!
Image Credit:
https://youtu.be/3otzsy4l1jA