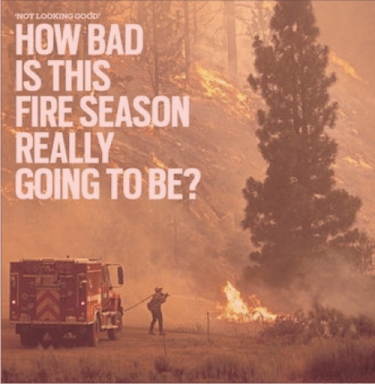 It’s not quite noon, but it’s already getting hot as Alan Huston pushes his way through thickets of dry, prickly brush on a parched hillside overlooking the town of Los Gatos. If a fire broke out here, all this stuff is going to burn,” said Huston, a researcher in San Jose State University’s Fire Weather Research Lab. “There are some healthier-looking big trees over there. But a lot of this?” his voice trailed off as he waved his hand over the water-starved landscape dotted with multimillion-dollar homes. “Not looking good.”

The picture at the top of this blog posting (and the text above) comes from a front page story in the San Jose Mercury News, written by the Mercury's environmental reporter, Paul Rogers. The fact that California's communities are highly vulnerable to wildfire is not, of course, really "news" to anyone who lives in Santa Cruz County. Last August, the CZU Lightning Complex Fires "killed 33 people, destroyed more than 10,000 homes, and incinerated the visitor center, campgrounds and other facilities at Big Basin Redwoods State Park, California's oldest," located in the mountains above Boulder Creek.
What struck me about the article in the Mercury, which appeared in the July 11, 2021, edition of the newspaper, was not so much the report on the fire dangers facing California but on the characterization of those dangers as our current "fire season."
The "seasons" we typically think of are Spring, Summer, Fall, and Winter, and these seasons depend on natural phenomena unconnected to human activity. Click that link for a quick and easy refresher course on how a tilt in the Earth's axis, in its relation to Earth's orbit around the sun, is what ends up giving us those "four seasons" we know so well.
And fire season?
The ever more extensive "fire season," which certainly now includes a good part of Spring, all of Summer and Fall, and a significant part of Winter, is a "season" largely created by human activity. Climatic changes associated with human-caused global warming have created this new "season," which is likely, ultimately, to extend into every part of our calendar year.
We are burning up the planet, and all that combustion just makes global warming worse.
I think that calling the ever-increasing fire dangers that face human civilization a "season," is a nifty way to associate fire dangers with some sort of natural process to which we must, of course, react and adapt, rather than face what's really going on.
We are burning up the planet.
It is not some natural "season" that is causing the wildfires.
It's all on us!
Image Credit:
https://www.mercurynews.com/2021/07/11/how-bad-is-this-fire-season-in-california-really-going-to-be/