#195 / The Filibuster Helps Nobody 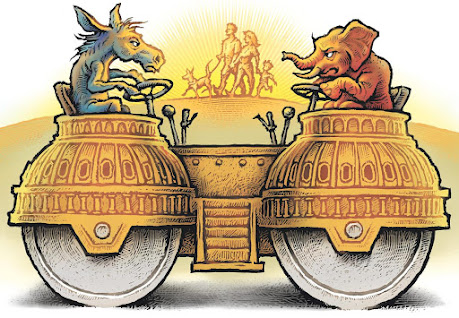 The Opinion page of The Wall Street Journal thinks that the filibuster is a very good thing. This is not surprising, of course, since the filibuster allows a political minority to prevent the political majority from doing what the majority thinks our government ought to do.
The Wall Street Journal tends to cater to the ultra-wealthy (who are in the minority, of course, when measured by numbers instead of money). A Congress that was more responsive to the majority (measured by numbers, instead of money) would probably make the ultra-wealthy pay more taxes, to allow the federal government to provide various benefits to all the rest of us. It is not surprising that the wealthy and the ultra-wealthy want to keep that filibuster in place.
But let's pay some more detailed attention to the argument being advanced by The Wall Street Journal. On June 21, 2021, The Journal published an Op-Ed authored by Mike Solon of The American Enterprise Institute and Bill Greene, president of a Republican-oriented consulting firm. Their Op-Ed was titled, "The Filibuster Helps Nobody, and That Means You."
The argument advanced by Solon and Greene was somewhat unusual. At least, I thought so. This pair first divided the nation into "political somebodies" and "political nobodies." The "political somebodies" are those persons who pay attention to politics, but according to Solon and Greene, "the U.S. has far more political nobodies than somebodies."
The "political nobody" contingent, the way Solon and Greene see it, is composed of people who "don't vote in every election or know the names of their elected officials." These folks - just regular folks - don't care much about politics, according to Solon and Greene; they just want to focus on "their families, businesses, religion, careers, sports, arts, education, and other personal pursuits."
So, given the things of most interest to the "nobodies," involvement in politics is an actual burden. The filibuster means liberation for them. At least, that's what Solon and Greene say:

Through the filibuster, Americans enjoy the unique freedom not to be politically active while remaining largely safe in their lives, liberty and property. The political nobodies are liberated to focus on improving their own lives and the lives of those around them (emphasis added).

According to this argument, the filibuster prevents the federal government from doing much of anything, and that's a real blessing for the "nobodies." Because the government won't be able to do much, the "nobody contingent" doesn't have to get involved in politics at all. Thanks to the filibuster, which pretty much emasculates the government, the "nobodies" don't have to bother their heads about whether there might be some possibility of "Medicare for All," or free college education, or an increase in the minimum wage, or a new infrastructure bill. There really isn't any reason for them to become involved. Thank goodness for that!
"Eliminating the Senate filibuster would end the freedom of America's political innocents." That's what Solon and Greene are saying. Heavens! If the Congress might actually be able to do something there would be hell to pay. Here is a bit more of an explanation from Solon and Greene:

What happens if the filibuster ends? Legislating, now slow and tedious, would become fast, furious and radical. Partisan laws would flood across our landscape, from the left and the right, making extreme lurches the norm. As Sen. Kyrsten Sinema (D., Ariz.) has said, our nation could begin “ricocheting widely” every two years. Stability in the rule of law and business climate would vanish.

When the quality of our lives depends on our mastery of politics, all the political nobodies will have no choice but to become political somebodies (emphasis added).

Well, of course, to the degree that the government has the ability to impact our "families, businesses, religion, careers, sports, arts, education, and other things" - the things that all we "political nobodies" allegedly care about most - all those nobodies would, undoubtedly, start paying attention. If politics could make a difference, we'd all have to get interested. And isn't it true, even with the filibuster, that politics actually can make a difference?
You will probably remember the name of the guy who talked about a government "of the people, by the people, and for the people," and thought that maintaining such a government was the nation's highest priority. Starting from way back when, circa 1776, I thought there was a general agreement that "democracy" is really the right way to run our country.
But what a bother! You have to pay attention. You have to take being a "citizen" seriously. Wouldn't you just hate to be a "political somebody," and have to get involved in all those political decisions that define our world and shape our lives?
Solon and Greene (and The Wall Street Journal) seem to think that politics is only for the "somebodies," and that we "nobodies" are rarely privileged to be excused from the arduous efforts involved in any genuine democracy.
Do you buy that argument? Sorry, fellows, I really don't!
I may be a "nobody," but I'm sticking with Abe Lincoln!
Image Credit:
https://www.wsj.com/articles/the-filibuster-helps-nobody-and-that-means-you-11624226249