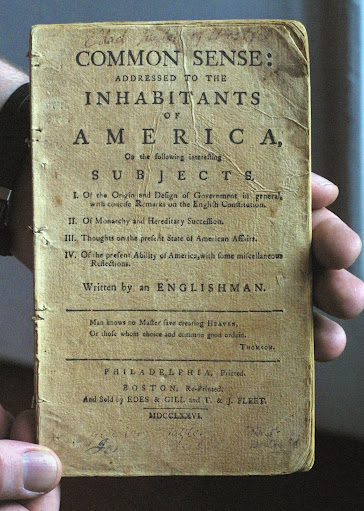 Akhil Reed Amar, Sterling Professor of Law and Political Science at Yale, has written a book about the United States Constitution. Its title? The Words That Made Us: America's Constitutional Conversation, 1760-1840.
Amar's book was reviewed by Adam Cohen in The New York Times Book Review on June 20, 2021. For those who can penetrate The Times' paywall, a click right here should send you to Cohen's review.
Several things struck me about Amar's book - based, of course, on the review in The Times, since I have not yet read the book itself.
First, I was struck by Amar's decision to use the word "Us" in the title. Amar is validating something extremely important when he identifies himself with "Us" - the Americans who have been "made" by the Constitution. Amar does not have a long lineage on the North American continent, or in this country. Amar's parents were medical students from India, studying at the University of Michigan, when Amar was born. One might think that his family background and family history would be the foundation upon which he would base his personal understanding of who he is. But not so. Amar's felt connection to the United States is based upon his understanding of its founding document, making clear that in his view "Americans" (among whom he counts himself) are in fact a politically-defined group - those who are physically here, in the United States, and who understand themselves as persons not mainly because of their family background, ethnicity, or religion, but because of their personal commitment to the fundamental political tenets upon which the nation is based. Because they see themselves, first and foremost, as "citizens."
That is my idea of an "American," too. If there is any merit to claims of American "exceptionalism," and I think there is some truth in those claims, that merit is associated with our understanding that we who commit to the Constitutional order of the nation are by doing so fully qualified to be "Americans," and to be included in an "Us" which is radically inclusive and comprehensive. This is  one of the greatest things about the United States of America.
Second, I was also struck by Amar's claim that the "conversation" about the Constitution, to which he alludes in the title of his book, is recognized as being so long and extensively carried out. It is easy to think that the United States, as a nation, pretty much sprang into existence with the Declaration of Independence, in 1776 - and that the revolutionary war was just a necessary insistence that we were, indeed, a new and independent nation once those words had been written and delivered to the English King. Amar's title suggests something else, that the "constitution" of the nation began long before 1776 and continued almost to the time of the Civil War. Again, this strikes me as correct.
Finally, I endorse the idea that the way we "constituted" our nation was not by means of a war, and not even by the elevated words of the Declaration, but by a long and ongoing "conversation" among all of us about what it would mean to be an "American," a citizen of the United States.
Here is how Cohen's review describes Amar's thesis:

Amar is no exponent of the great man theory of history, at least when it comes to the key documents of early America. He strongly suggests that America as a whole — through its great national conversation — did more to draft the Declaration of Independence than Jefferson, and more to write the Constitution than Madison. Most of the Constitution, he says, “simply followed from the logic” of the American constitutional conversation from 1764 to 1787.

This national conversation continued after the Constitution was written. It prompted the adoption of the Bill of Rights, the first 10 amendments that enshrined freedom of speech, protection against cruel and unusual punishment, and other rights highly valued by the public of that time. And it shaped how the newly created Constitution would be interpreted. Amar explains that in the early years, “conversation circles” played a major role in giving the new document meaning, as “the Constitution nudged senators to deliberate with senators; House members likewise to talk among themselves; justices to converse with local judges, juries and lawyers”; and “presidents to confer with” cabinet members and top staffers.

If it sounds as if Amar is suggesting that much of our constitutional heritage has been “crowdsourced,” he himself embraces that term. The Revolutionary era was, in his account, an age of communication rivaling our own technology-powered one. “The extraordinary conversational regime that dawned in the 1760s was not email, not the internet, not Google, not Facebook, not YouTube, not Instagram, Twitter or Zoom,” he writes. “But in hindsight this regime can be seen as anticipating these later developments” (emphasis added).

Our "Constitution," as Amar says, was the result of a long, and serious, and strenuous "conversation" about what we should be and would be, and about what we should do and would do, and how we should and would conduct ourselves in our mutual efforts to "make ourselves" into the nation that we have become.
I would suggest, going beyond Amar, that this "constitutional conversation" has never, really, ever been completely set aside, and that it must not be. Our constitutional conversation is continuing - and must continue - today.
Talking, among ourselves - friends and strangers both - is how we "make" the political world in which we most immediately live, and move, and have our being.
Image Credit:
https://www.nytimes.com/2021/05/04/books/review/the-words-that-made-us-akhil-reed-amar.html