#192 / Lincoln And The Declaration 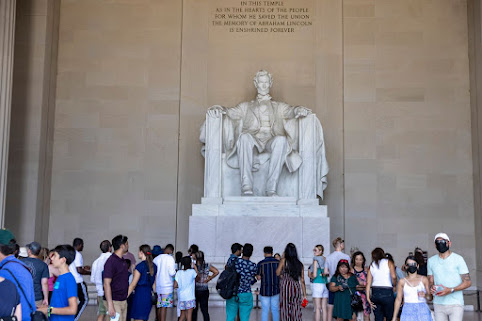 I was impressed by a recent column by William A. Galston, published in the July 7, 2021, edition of The Wall Street Journal. That column was titled, "Biden, Lincoln and the Declaration." I have included the full text of Galston's column below, since there would likely be a "paywall problem" for anyone who might want to read it, and to see why I liked the column so much.
What I liked, specifically, was Galston's emphasis on the truly extraordinary nature of The Declaration of Independence. It is true, when you read that document, that the bulk of it is made up of a long list of what those in the American colonies believed were the abuses and usurpations of the British monarch. After its brief introductory paragraph, however, rather than plunging immediately into its long listing of abuses, the Declaration begins with that soaring statement, written by Jefferson and celebrated by Lincoln, that we hold it to be "self-evident" that "all men are created equal, [and] that they are endowed by their Creator with certain unalienable Rights, [and] that among these are Life, Liberty and the pursuit of Happiness."
Galston goes out of his way to quote Lincoln on the immense importance of this assertion, penned by the slaveholder, Thomas Jefferson:

Lincoln didn’t hold Thomas Jefferson in high regard as a person or politician. Nevertheless, he praised the former president for seeing beyond the needs of the moment in 1776. “All honor to Jefferson,” he wrote in 1859—“to the man who, in the concrete pressure of a struggle for national independence by a single people, had the coolness, forecast, and capacity to introduce into a merely revolutionary document, an abstract truth, applicable to all men and all times (emphasis added).”

The undoubted importance of the foundational claim that all persons are "created equal," and that every person has certain "unalienable rights," is well understood.
Less often observed is that the Declaration of Independence assigns the advancement of our unalienable rights to the government, for it is precisely to "secure these rights" that "governments are instituted among Men." Properly understood, this is a statement that reinforces the idea that our Declaration of Independence is "aspirational" in its statements, and is not, thus, a lie perpetuated to ratify the dominion of white colonists over Native peoples and Black slaves. That is, of course, an assertion often made, and made for obvious reasons - Congress Member Cori Bush is quoted to that effect in Galston's column.
Despite the temptation to dismiss the words of our Declaration as mere meretricious rhetoric, I think it is important not to assign to Jefferson and the signers the label of "hypocrite," implicitly or explicitly. If that charge is valid then our Revolution has a foundation so badly flawed that the edifice built upon it must certainly fail. Galston, I believe, would agree with me on this, and insist that the story of our Revolution, which started with the Declaration, is not over yet, and that it is a foundational responsibility of our democratic government to secure and establish the unalienable rights recognized in The Declaration.
The sweeping nature of the "unalienable rights" claimed for each one of us in the Declaration is another thing that is not usually emphasized nearly enough. The Declaration says that every person has an "unalienable," individual right to "the pursuit of happiness," which assertion is the origin and foundation for the claim to the kind of unbounded and unlimited personal freedom that Americans justly celebrate as their irrevocable endowment from the Revolution.
Looking to our Constitution, the form of government it established was precisely aimed at "delivering" on the promises of the Revolution, and specifically on the promises contained in the Declaration that began that Revolution. I think few have properly appreciated, in our Bill of Rights, the meaning of the Ninth Amendment, which says that "the enumeration in the Constitution, of certain rights, shall not be construed to deny or disparage others retained by the people." In fact, this statement ratifies the promise in the Declaration that one of our primary rights is the right to "pursue happiness," a right that provides each one of us with a claim to individual, personal freedom. Our "right" to pursue our individual "happiness," if a real right, must inevitably be understood as providing each one of us with a self-defined ability to decide, for ourselves, what constitutes our happiness, and a rejection of the idea that our rights can be catalogued and handed out to us by any government edict or listing of what are going to be considered "acceptable."
In sum, I liked the Galston column because I love the American Revolution, and love the nation founded upon it, and because I want to work, in what remains of my life, to realize the aspirational promises it made for and to each one of us.
You can read that column for yourself, below:
oooOOOooo
Biden, Lincoln and the Declaration
Jefferson knew America hadn’t yet realized its ideals.
By William A. Galston
In a speech on the Fourth of July, President Biden summarized his understanding of the American experiment: “I’ve long said that America is unique. Unlike every other nation on earth, we were founded based on an idea. We hold these truths to be self-evident: that all people are created equal, endowed by their creator with certain unalienable rights—among them life, liberty and the pursuit of happiness. And while we’ve never fully lived up to those words, we have never given up on them.”

Mr. Biden is right. This is the basis on which Abraham Lincoln, our greatest president, defended the Union and abolished slavery, and it is the only basis on which we can hope to build an enduring multiracial, multiethnic democracy.

Also offering an interpretation of America on Independence Day was Missouri Rep. Cori Bush, who wrote on Twitter : “When they say that the 4th of July is about American freedom, remember this: the freedom they’re referring to is for white people.” She is partly right. America’s fight for separation from Great Britain didn’t free the slaves, nor did the ensuing seven decades of our national independence—a failure that Frederick Douglass denounced in his magnificent 1852 oration, “What to the Slave Is the Fourth of July?”

But Douglass didn’t reject the Declaration of Independence or the Constitution. He embraced them because, he argued, they embraced him. In Douglass’s view, the problem wasn’t our principles or our institutions, but the practices that contradicted and undermined them. The equality described in the Declaration wasn’t only for white people; it was for everyone. The struggle was to make this principle a reality—for everyone. It still is.

Lincoln was our greatest president because, like Douglass, he understood that the Declaration lies at the heart of our national identity and that we must not reject it, but rely on it. Speaking at Springfield, Ill., in the wake of the infamous Dred Scott decision, Lincoln insisted that the authors of the Declaration weren’t hypocrites but realists who knew that many Americans weren’t enjoying the freedoms to which they were entitled and didn’t have the power to right this wrong. Rather, the Founding Fathers meant to establish “a standard maxim for free society, which should be familiar to all, and revered by all; constantly looked to, constantly labored for, and even though never perfectly attained, constantly approximated, and thereby constantly spreading and deepening its influence and augmenting the happiness and value of life to all people of all colors everywhere.”

The principle of human equality, Lincoln observed, “was of no practical use in effecting our separation from Great Britain.” The rebellious colonists could have confined themselves to denouncing King George III as a tyrant. Instead, they made a conscious decision to embed their cause in a larger claim about the rights of equal individuals and free peoples.

Lincoln didn’t hold Thomas Jefferson in high regard as a person or politician. Nevertheless, he praised the former president for seeing beyond the needs of the moment in 1776. “All honor to Jefferson,” he wrote in 1859—“to the man who, in the concrete pressure of a struggle for national independence by a single people, had the coolness, forecast, and capacity to introduce into a merely revolutionary document, an abstract truth, applicable to all men and all times.”

Mr. Biden drew on this tradition in his speech. And by placing the preservation and promotion of democracy at the center of his foreign policy, he demonstrates his fidelity to Lincoln’s insistence that our founding principles apply beyond our times and shores.

The Declaration’s universal claims are assertions about truth. But if one believes, as many of today’s radicals do, that words are only weapons in the struggle for power, and that high-minded claims are cloaks for the interests of groups who seeks to maintain their dominance over others, then the Declaration of Independence is a sham.
The Declaration is a shield that guards against nativism as well as nihilism. Like most nations, the U.S. has its hallowed ground and honored dead. Unlike most nations, our foundation isn’t blood and soil, not a single racial or ethnic group, not a particular cultural tradition or religious creed. We are a nation dedicated to a proposition that has become the only possible basis of our national unity. If we reject this proposition in principle or deny its possibility in practice, we are surely lost (emphasis added).
Image Credit:
https://www.wsj.com/articles/biden-lincoln-and-the-declaration-11625585851