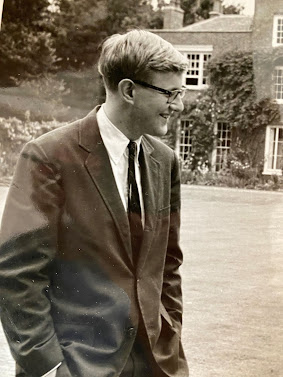 Pictured is William Damon, as a high school senior at Phillips Academy Andover, in 1963. Damon is now a professor of education at Stanford University, my own alma mater.
The date of Damon's high school graduation makes Damon two years younger than I am, at least as I do the math, which means that we are more or less in the same demographic cohort. Maybe that is why I somehow identified with the story that Damon told in the June 19-20, 2021, edition of The Wall Street Journal. Damon's article is titled, "Golfing With The Father I Never Knew."
As he tells the story, Damon's father was a "great golfer," which Damon didn't really know until rather late in Damon's life. Damon's father abandoned him and Damon's mother before Damon was even born. Thus, Damon never got the benefit of his father's tutelage - and he regrets that! Damon's own golf game is not that great. Maybe if his father hadn't abandoned his mother and his unborn child, during World War II, Damon would have been a lot better golfer.
Golf was a big part of my father's life, too; however, Damon had a father he never knew, and I was fortunate enough to have the opposite experience. I never really went anywhere with golf, but everywhere else I have ever been in this life has a strong link back to my Dad, and what I learned from him. As I have reported earlier, he is one of my "Five Guys."
Fathers going off to war (and either coming back, or not) is definitely one of the life-defining experiences for that demographic cohort born from 1943 to 1945. I liked Damon's reflections on his life, as recounted in "Golfing With The Father I Never Knew." He has actually written a whole book about it, A Round of Golf with My Father: The New Psychology of Exploring Your Past to Make Peace with Your Present.
If you can evade the paywall, I recommend clicking the link and reading The Journal article yourself.
What really made me want to highlight Damon's article was his reference to a practice developed by the "world-renowned gerontologist and psychiatrist" Robert Butler - the "Life Review."
Damon presents the idea of a "Life Review" on a rather positive note:

A life review involves examining the high and low points of our past by searching our memories and retrieving school records and other personal documents.

Butler, though, when you read what he says, provides a somewhat less upbeat depiction of what a "Life Review" entails, or may entail:

This paper postulates the universal occurrence in older people of an inner experience or mental process of reviewing one's life. I proposed that this process helps account for the increased reminiscence in the aged, that it contributes to the occurrence of certain late-life disorders, particularly depression, and that it participates in the evolution of such characteristics as candor, serenity, and wisdom among certain of the aged.

Based on my own experience, I do think that the "Life Review" process, if not "universal," is something that is pretty common. I have found myself increasingly engaged in "Life Review" type activities, some of which end up being reflected in my blog postings. My siblings have organized a website devoted to the "Bracken Patton History," to collect anecdotes and images that document our family recollections. They do tend to slip away, you know, if not tied down.
Damon's first impression - gathered from his mother - was that his father had been killed in the war. Ultimately, he found out that this wasn't actually true, and that his soldier father had used a stateside leave from the German front to marry his mother, impregnate her, and then to disappear from her life - and from Damon's life - forever. After the war, Damon found out much later, his father divorced his mother, and then married a "delightful French ballerina." When Damon finally learned the true story, as he tells us below, Damon did not form a good opinion of his father:

As a child, I had sensed that the way my mother answered questions about my father signaled feelings other than simple grief at his loss. When I actually heard from her that he had abandoned us, I deduced that he was an irresponsible cad. As a college student still figuring out who I was, my instinct was to avoid identification with someone who could be a negative role model.

Despite his initial thought, Damon ultimately came around to rather positive feelings about his father. It turned out that his father had done a number of very admirable things, which ultimately reconciled him to his father, when he found out about them:

Discovering what he had accomplished unburdened me from my longstanding anxiety that he was a no-account scoundrel. It didn’t diminish his irresponsibility in abandoning my mother and me at birth, but it did provide me a path for respecting him and eventually forgiving him.

As we do our own life reviews, that is the trajectory I recommend! Lots of bad things happen to us in our lives, and we do a lot of bad things ourselves. If we want to end up with those quite desirable characteristics of "candor, serenity, and wisdom," which Butler discusses, finding gratitude and forgiveness for all that has happened to us, and for all that we have done, is the conclusion towards which any "Life Review" should aim!
Image Credit:
https://www.wsj.com/articles/golfing-with-the-father-i-never-knew-11624075260