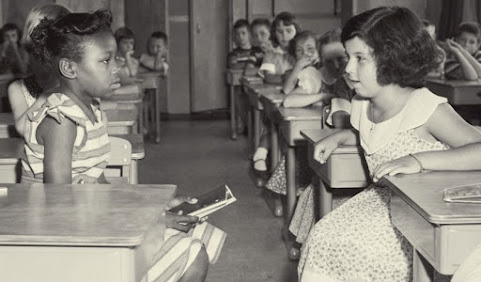 As political candidates know, each interaction with a stranger holds the seeds of a transformation, and each of us already has far more political power within our grasp than we acknowledge or allow.

The statement quoted above, a statement that I believe is profoundly true, is found on page 168 of Talking To Strangers, by Danielle S. Allen. Allen's book, which I highly recommend, was published in 2004, and is subtitled, "Anxieties of Citizenship since Brown v. Board of Education."
Allen is the James Bryant Conant University Professor at Harvard University, Harvard's highest faculty honor, and she is also the Director of the Edmond J. Safra Center for Ethics. Prior to joining the faculty at Harvard in 2015, Allen was UPS Foundation Professor at the Institute for Advanced Study in Princeton, New Jersey.
Allen's book is unusual. While quite properly seen as a work of political theory, Talking With Strangers includes a literary analysis of Ralph Ellison's Invisible Man and undertakes a detailed discussion of Plato and Aristotle, with quotes in Greek. It is also, most centrally, a deep reflection on the "reconstitution" of the United States after Brown v. Board of Education. It is also, in many ways, a kind of practice guide to life within a democratic society.
The quotation I begin with, above, is found in the Epilogue, and serves as a summarizing statement. Of course, I particularly appreciated Allen's assertion that "each of us already has far more political power within our grasp than we acknowledge or allow." Not only is that true, but I think that this realization is the single most important thing that "we, the people," need to understand as we contemplate the future of our democratic republic. Still, while it is worthwhile to get to this summary, that is probably best accomplished by starting at the beginning.
Allen begins by addressing the issue I wrote about yesterday, the issue of trust and distrust:

Within democracies...congealed distrust indicates political failure. At its best, democracy is full of contention and fluid disagreement but free of settled patterns of mutual disdain. Democracy depends on trustful talk among strangers and, properly conducted, should dissolve any divisions that block it (page xiii).

When theorists argue that democracies are based on consent, they mean that the entirety of a democracy's legitimate strength and stability derives from the allegiance of citizens. That allegiance endures only so long as citizens trust that their polity does generally further their interests; minorities must actually be able to trust the majorities on whose opinions democratic policies are based. When distrust among electoral minorities endures over time and congeals, such that citizens recognize themselves as constituting a disaffected group, only four outcomes are possible: (a) distrust of the electoral majority will be dissolved and converted into trust; (b) the group will leave the polity; (c) the group will rebel against the polity; or (d) the group will be retained by repressive acts of state force. (When distrust flows in the other direction, and the majority distrusts the minority, there is the possibility that the minority will be expelled or eradicated). The first eventuality - the conversion of distrust into trust - alone suits democratic practice (pages xviii - xix).

The greatest part of Allen's book discusses how best to build trust between those who differ on what should be done. The recognition that we are different - a "plurality," as Hannah Arendt would say - is one essential ingredient. So is the realization that sacrifice is central to our ability to live together. That word, "sacrifice," while it can extend to the willingness to "give one's life for one's country," is most honestly seen as a willingness to let some other group get what it wants, even while you and your group don't. However, a willingness to make that kind of sacrifice depends on trust - a belief that sometime in the future, the group for whom you and your group has sacrificed will makes its own sacrifice on your behalf.
I could go through the book, outlining the entire argument that Allen makes. Better for you to read this book yourself. Think, though, whether or not what you have gotten from this blog post doesn't ring true, and doesn't describe our current situation. Today is the day we inaugurate a new president, with a new opportunity to forge a trusting relationship between citizens who are in different circumstances, and with different perspectives. We must not lose this chance!
If we are going to maintain a democratic politics in the United States, we are all going to have to sacrifice (in the way Allen uses the term). To arrive at a renewed and healthy democracy, we must above all else build trust among ourselves - among our differences! We need always to remember that it is trust that initiates the process of mutual sacrifice that makes democracy possible. Realizing this, those who have the most should be first in line for the sacrifice. Those who have the most must make the sacrifices that can restore the trust that will make our common life possible. Today, it is the political victors who have the most. Let us not forget that!
Did I say this before? This book is recommended!
Image Credit:
https://slought.org/resources/talking_to_strangers