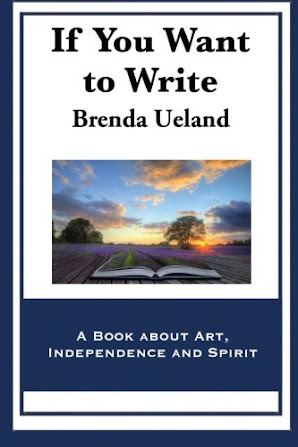 A "Little Free Library" book attracted my attention, as I stopped on one of my walks around the city and took a look at what was on offer. The book was titled, If You Want To Write, by Brenda Ueland. I found, after getting it home and looking into it, that it's a classic, and that Ueland's book has been recommended by Carl Sandburg as "the best book ever written about how to write."
Ueland, like me, thinks highly of the "Russian authors," Tolstoi, Chekhov, and Dostoevsky. Here's one of her observations about Tolstoi:

I was very much helped by something Tolstoi said about writing. I tell you because it may help you. First, he said that there is nothing in the world that should not be expressed in such a way that an affectionate seven-year-old boy can see and understand it. I often think of this and it is a guide and help. I take down a book by Tolstoi and see that he does as he advocates.

Then in a famous essay called "What is Art?" (which made everybody very angry) he said something like this: Art is infection. The artist has a feeling and he expresses it and at once this feeling infects other people and they have it too. And the infection must be immediate or it isn't art.

I kind of like that - and I think she's right. I got infected by Bob Dylan, early on!
Image Credit:
https://www.abebooks.com/Want-Write-Book-Art-Independence-Spirit/30776275898/bd