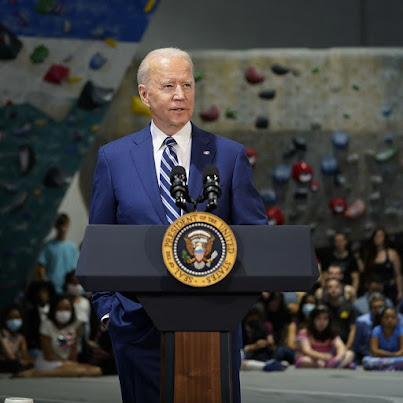 William Galston, writing in the June 2, 2021, edition of The Wall Street Journal, suggests that President Biden is making a "Slow-Growth Budget Gamble." Given the paywall protection that might well prevent non-subscribers from reading Galston's analysis, I am providing an excerpt from his column at the bottom of this blog posting.
Galston sees the "gamble" in the fact that the Biden Administration is not doing more to increase the growth of the economy. Our current two-percent annual growth rate is unacceptably low, from his perspective.
From my perspective, the "gamble" is trying to increase economic growth at all, given that economic growth, as currently defined, is absolutely linked to an increase in the greenhouse gas emissions that are bringing us hurricanes, flooding events, droughts, immigration crises, wildfires, and heat deaths, with crop failures and food scarcity expected to arrive soon.
The preceding list, of course, does not mention the species extinctions which are proceeding apace. We focus very little on anything that does not directly affect human beings (with the emphasis on "directly"). Despite our failure to pay attention, however, the "indirect" impacts of the Sixth Mass Extinction that is now underway profoundly affect humans, not just those living things we don't notice, and don't even know about. We are, as all living things are, dependent on the overall health of our planetary environment, and on all the various other species that inhabit it. What is bad for the butterflies, coral reefs, and the polar bears is bad for us, as well.
In a debate about what is most important for our future - the protection of our global environment or the growth of the national economy - I am not big on "betting." Less growth, not more, seems like the safest - in fact, necessary - course for us to pursue.
oooOOOooo
Biden’s Slow-Growth Budget Gamble
William A. Galston
President Biden’s proposed budget would represent a sea change in American fiscal policy. If enacted, outlays over the next decade would increase by about $8 trillion and revenues by $6 trillion, bringing the deficit to $14.5 trillion from $12.3 trillion projected under current policy. The share of the economy flowing to the federal government would rise to about one-quarter, up from one-fifth, and the budget deficit would average about 5% of gross domestic product. By 2031 national debt held by the public would stand at $39 trillion, a record 117% of GDP....
But commentators have mostly overlooked the biggest surprise, and core conundrum, of the president’s proposal: Despite trillions of dollars of additional expenditures—some of which are investments, others not—the projected rate of economic growth increases only modestly, and most of the bump comes in the early years before tapering off.
During the next two years, Mr. Biden’s spending surge would help return the economy to full employment faster than staying at the status quo. This is a good thing. But between the beginning of fiscal 2024 and the end of fiscal 2031, the administration’s projections show GDP rising by $8.9 trillion, barely distinguishable from the $8.8 trillion in CBO’s baseline.
The bottom line: The economy will stay stuck at 2% growth, extending the period of slow growth that began early in the 21st century. Even during the first three years of the Trump administration, large spending increases and an enormous tax cut yielded growth averaging 2.5%, well below the 3.5% level of the 1990s....
Getting America back to faster growth will take resources and focus. But if growth remains slow, Mr. Biden’s honorable effort to improve the lives of working- and middle-class families may end up hobbled by the well-known difficulties of zero-sum politics.
Image Credit:
https://www.wsj.com/articles/bidens-slow-growth-budget-gamble-11622566765