Recently, I visited an old college friend who now lives, during the winter months, in Sonoita, Arizona. During the rest of the year my friend lives in Duluth, Minnesota, where his children are located. Given the connections that Duluth has to Bob Dylan, I think I'll have to make a visit up there, too, but I went down to Arizona for a few days, at the end of May, just to keep my friend company during the last part of his Winter sojourn this year.
Vegetation is sparse in Sonoita (and so is water, even more so than in California in this year of our mega-drought). In Sonoita, the winds blow, ferociously, for extended periods, and the total population is something like 800 people. Most of those who live in Sonoita are ranchers of one sort or another, or work in the few restaurants, motels, and retail stores - or are Border Patrol agents. Attending a woman's barrel-racing event was the major entertainment on tap. Dinner was pizza at the "Velvet Elvis" restaurant in nearby Patagonia. Our main expedition was a visit to the "Trump Wall" in Nogales, which is right on the Mexican border, and which is the county seat of Santa Cruz County, Arizona. The picture below shows what that "Trump Wall" looks like. I will make no personal comment on what our former president said was "that beautiful wall." Like Fox News puts it: you decide: 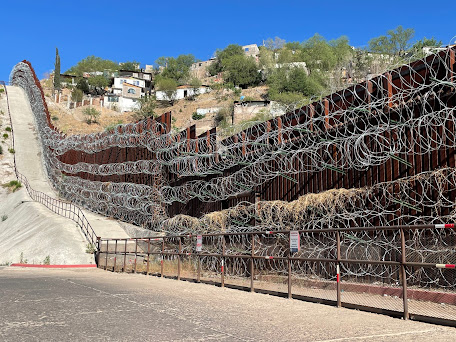 There are not too many people in Sonoita who want to discuss the "Great Decisions" questions or other such topics. My friend was pretty much starved for good discussion, and he produced an agenda of suggested discussion topics for my visit that contained thirty-three listings. One of these was "legacy."
As I indicated at the outset, my friend is an "old" friend - and that is in both senses of the word. At this stage in our lives we are both "old," chronologically, and my friend is thinking about the implications of that. He's not trying to "duck" the issue, and neither am I. "Legacy" means what will we leave behind us, when we're gone. Children and grandchildren figure significantly into the picture, of course, but so do questions about who will remember us, and for what reasons. My friend has had a notable career, and remains very active in work with the Friends Committee on National Legislation, and with the Quaker Universalist Fellowship - and with Voices From The Border. What about my legacy, he asked.
Well, I said, I am hoping to be remembered for my time on the Santa Cruz County Board of Supervisors (twenty years, from 1975 to 1995), during which time I think Santa Cruz County exemplified what is possible when locally-based democratic self-government is alive and active. I donated 120 file boxes of my supervisorial records to the University of California, Santa Cruz Library, and an index to these records is available, online, under the following title: "The Gary Patton Political Papers." I have a few other "legacy" type offerings available online, too, listed in the lefthand column of this blog. I told my friend that my hope was that someone, sometime, would write up a history of the politics of Santa Cruz County, from 1970 to the end of the 20th Century, because what happened in our community was truly extraordinary.
At this point, my friend suggested that I should actively seek out someone to do exactly that. I said I thought I really couldn't pay for that work! He suggested (being a great volunteer himself) that I should look for a volunteer.
Well, that is an idea, and while I have no great expectations, why not? Getting a qualified person to volunteer to do that history is a long-shot idea that could work out - given that anything is possible, as I am fond of saying.
Readers should consider this blog posting as a "help wanted" bulletin. Anyone who wants to do a great graduate thesis, ultimately publishable, I am sure, or who would otherwise like to write up the history of this extraordinary period in our local history, with lots of lessons applicable elsewhere, please don't hesitate to get in touch. There is an important story to be told, I am certain of that.
As an alternative, I suggest subscribing to this blog. In a way, I am trying to do that "legacy" thing on my own account, right here!
Image Credit:
(1) - https://www.co.santa-cruz.ca.us/Departments/GrandJury.aspx
(2) - Gary Patton personal photo