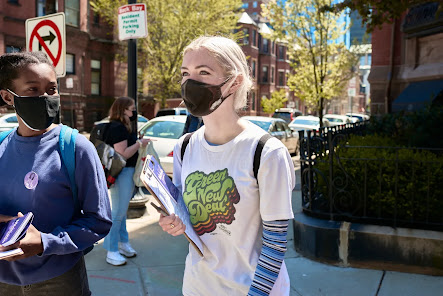 That's when I realized I had a stake in this game. They are scared of me, a random teenager on the internet who just happened to be doing some organizing with her friends.

Calla Walsh, both pictured and quoted above, is a sixteen-year-old Boston activist. She and her very young colleagues, the "Markeyverse," are out to transform politics in Massachusetts - and perhaps ultimately in the nation. An article in the May 19, 2021 New York Times tells the story. If anyone reading this blog posting can penetrate The Times' paywall, let me suggest that you read the whole story. I find it quite encouraging. Here is an excerpt that will give you the flavor:

Calla Walsh [is] a leader in the group of activists known here as the Markeyverse. Ms. Walsh, a 16-year-old high school junior, has many of the attributes of Generation Z: She likes to refer to people (like the president) as “bestie.” She occasionally gets called away from political events to babysit her little brother. She is slightly in the doghouse, parent-wise, for getting a C+ in precalculus.

She is also representative of an influential new force in Democratic politics, activists who cut their teeth on the presidential campaigns of Senators Bernie Sanders and Elizabeth Warren.
The full strength of these activists — many of whom are not old enough to vote — did not become clear until last fall, when they were key to one of the year’s most surprising upsets, helping Senator Edward J. Markey defeat a primary challenge from Representative Joseph P. Kennedy III, who had been heavily favored to win.

But the Markeyverse carried out a devastating political maneuver, firmly fixing the idea of Senator Markey as a left-wing icon and Representative Kennedy as challenging him from the right. They carried out ambitious digital organizing, using social media to conjure up an in-person work force — “an army of 16-year-olds,” as one political veteran put it, who can “do anything on the internet.”

The "Markeyverse" got engaged in the Massachusetts' Senatorial election because of young people's concerns about global warming - and because the national government has failed to take any systematic or effective action in response. The younger you are, of course, the more you have "skin in the game" where the issue of global warming is concerned.
I was attracted to the article, immediately, because Calla Walsh used the word "scared" to describe how traditional political players - all Democrats - felt about her and her "Markeyverse" colleagues.
I endorse the idea that political action should make officeholders feel "scared." Not physically, of course, but in terms of what almost all politicians care about most, their ability to keep their jobs.
The proper operation of our system of representative government requires that those whom we elect to represent us should actually represent "us," the voters, not their campaign contributors or the reigning (and often status quo) ideology. Having been an elected official myself, active in electoral politics at the local level for twenty years, I witnessed the system working as it ought to in Santa Cruz County, California.
When the majority wants something, and elected representatives are not delivering, we must either replace those non-delivering representatives at the next election, or those representatives must decide to change their ways, and to get with the program. That is how it's "spozed to be." Effective political organizing (like that done by the "Markeyverse") can be thought of as a "scared straight" program for politicians.
How do you scare them? You have to do what Calla Walsh and her compatriots are doing. You have to get personally engaged in politics, on the streets and on the internet, and remind our representatives who they are supposed to be working for!
The concept is simple, but the execution of the concept means citizens and voters must redirect their energies, and become "political" - just like Calla Walsh. You can't have any kind of effective self-government unless you are willing to get involved yourself.
Image Credit:
https://www.nytimes.com/2021/05/19/us/teens-massachusetts-elections.html