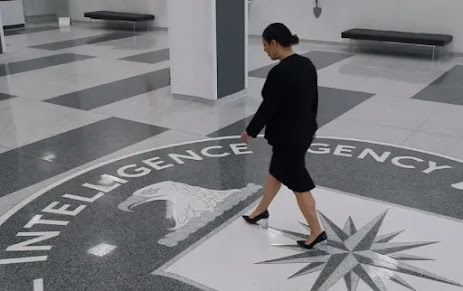 Roberto Lovato, writing in The Nation, is alerting us that an "imperial rebranding" is now in progress. Lovato's article is titled, "The Age of Intersectional Empire Is Upon Us." Lovato does not think that this is a good thing!
Here is how he kicks off this article:

My homie Ofelia Cuevas sat spellbound before the CIA recruitment video that folks are still fussing about a week later. The video featured a black suited, code-switching, Latina with plenty of attitude—the kind of attitude Ofelia likes to inspire in her Ethnic Studies students at the University of California, Davis. The confident, thirtysomething woman in the video also wore pumps and big golden hoop earrings. Many a working-class homegirl wears the earrings as a way of embracing their inner Aztec warrior goddess in the parts of the Southwestern United States, like California, that used to be called Mexico. Ofelia and I grew up around fierce, young women who sported hoop earrings back in the 1980s, just before I decided to join war against a US-backed fascist military dictatorship in El Salvador.

She listened intently as the video’s violin music crescendoed to the moment when the intense, unnamed Latina delivered the fury of her message in incantatory tones:

I am a woman of color. I am a mom. I am a cisgender millennial who’s been diagnosed with generalized anxiety disorder. I am intersectional.

“At first,” Ofelia, a scholar of race and media, told me, “I couldn’t believe it. I thought it was a joke. But as I kept watching, I thought, ‘Oh my God—it’s real.’” She added: “The fucking CIA is trying to be ‘woke.’”

It is sometimes hard to get one's head around what is commonly-called "identity politics," in which the identity of a person engaged in public policy work may seem more important than the content of the policies being pursued. Lovato and Ofelia clearly think that politics should be judged on the basis of content, substance, and policy, and not on the basis of the identifying qualities of the people involved.
I must say, I agree. Here is how Lovato ends his article:

Debates about intersectional empire are just beginning. I recently noticed this through a picture making the rounds on Twitter. It shows four Navy servicemen standing, in battle gear, before a helicopter with a rainbow flag draped on it. The tweet says, “History was made on Friday with the first ever all gay @USNavy helicopter crew.” I see the grey banality of the helicopters and can’t imagine it would’ve made any difference to the peasants bombed in El Salvador whether there were rainbow flags on them.