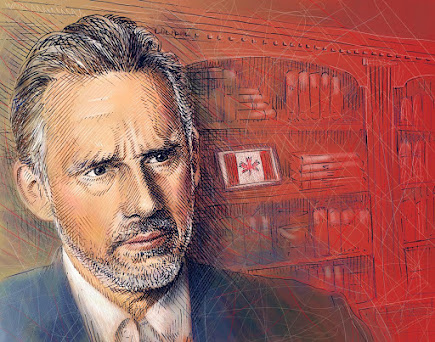 Pictured is Jordan Peterson, "The Man They Couldn't Cancel." That label was affixed to Peterson by Barton Swaim, a columnist for The Wall Street Journal. Like virtually all of those who write for The Journal, Swaim is a political and cultural conservative, and like many conservatives, Swaim seems to be semi-obsessed with so-called "cancel culture."
Peterson, the man who couldn't be "cancelled," is a conservative college professor who teaches psychology at the University of Toronto. According to Swaim, "what put Mr. Peterson in the crosshairs of North America's cultural arbiters was his vocal opposition to identity politics, and specifically the totalitarian methods of militant transgenderism."
I have been mildly interested in the "cancel culture" discussion - but definitely not obsessively preoccupied with it - and it was my mild interest in this topic that led me to read Swaim's column. The following excerpt, somewhat related to a discussion of "cancel culture," but not really central to it at all, seems to me to be worth thinking about - completely apart from the "cancel culture" connection:

Contempt for the “working class” by North America’s “liberal educated elite,” is a major reason for his popularity, [Peterson] says. “There aren’t very many people with an encouraging voice,” Mr. Peterson says. “Most of the things you read by intellectuals—not all, but it’s a failing of intellectuals—most of it is criticism. Look what you’re doing to the planet. What a detestable bunch of wretches you are, with your rapacious structures and your endless appetite and your desire for power. . . . Look at what your ambition has done to the planet. How dare you!”

Mr. Peterson doesn’t directly challenge the substance of these dreary criticisms. Rather he protests that they’re unnatural and unhealthy. “The proper attitude toward young people is encouragement,” he says—“their ambitions, their strivings, their desire to be competent, their deep wish for a trustworthy guiding hand. I think our culture is so cynical that it’s impossible, especially for the established intellectual chattering critics, to even imagine that encouragement is possible (emphasis adddd).”

I do think that "encouragement" is exactly what we need right now. Encouragement, not critique. And we all need it, not just young people, though young people, perhaps, will end up needing it the most.
The challenges facing all human beings who are alive today require us to mount a courageous response to the situation into which we have placed ourselves. Global warming is putting human civilization at risk, not to mention threatening the mass extinction of all other living things. As Caitlin Johnstone says in "The Day The World Ended," we are also living with the imminent prospect that an all-out nuclear war could erupt at any time. Other challenges, almost as great as these, also loom before us, like a storm advancing across the fields, coming to us, inexorably coming to us.
Everyone actually knows of our real situation, but hardly anyone knows what to do. We are deeply afraid. We distract ourselves with entertainment, but we must do better. As Bob Dylan says:

Eden is burning, either brace yourself for elimination
Or else your hearts must have the courage for the changing of the guards

What we need are words that will strengthen our hearts, and that will give us the courage to face the changes that are already upon us, the changes that are still to come, visible on our horizons, whichever way we look.
Don't we all need to be reminded - again and always? Don't we all need to recall these encouraging words?
Sí, Se Puede
We Shall Overcome
Image Credit:
https://www.wsj.com/articles/the-man-they-couldnt-cancel-11619806528