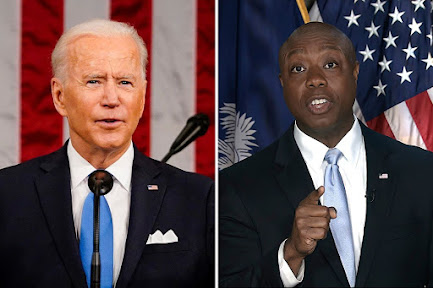 Wall Street Journal columnist Peggy Noonan has commented on President Biden's speech to a joint session of Congress. This was the speech the president gave as he reached his one-hundredth day in office. Noonan also commented on the response to the president's speech given by Senator Tim Scott on behalf of the Republican Party. Scott is pictured above, along with the president.
These were two different, but "plainspoken speeches," Noonan said. "Both were effective and each will have an afterlife."
Scott's speech contained this claim: "Hear me clearly: America is not a racist country." This statement was designed and intended to be provocative, and it apparently did provoke "insults" from "the left," as Noonan describes the reaction to Scott's speech.
I was most struck, however, by the words that Scott used to end his speech, words that are just as applicable to a racist America as to an America which Scott claims is not racist:

Original sin is never the end of the story. Not in our souls and not for the nation. The real story is always redemption.

Rather than focus on Scott's provocative initial statement - a statement that could end only in rancor, disagreement, and division - I believe it is that final statement to which we should turn our attention. That is the statement that should have an "afterlife," because the past is not predestination; it is only the past, however glorious or ignoble.
Slavery, and all its aftermath, has properly been called America's "original sin." But original sin is never the end of the story. It is, in fact, the beginning of the story. It is where we find ourselves now; it is where we always find ourselves. We have sinned, and we are sinners, in every secular as well as in every religious sense. Are we not racist? We can debate that. We have been. Are we now?
Whatever our past, and however we decide to count its continuing presence in our lives - or however we may seek to deny it - we live not in the past, and are not determined by the past. We live, always, in this present moment, facing the future, and it is now, right here, that we will decide who we are, and what we will do.
In this moment, in this present moment, redemption is always the real story.
Image Credit:
https://www.wsj.com/articles/two-very-different-but-plainspoken-speeches-11619736122