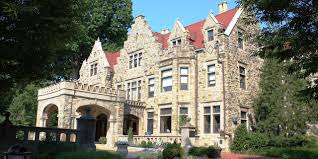 Oh, oh! The Quakers are coming, and City Journal has sounded the alarm!
For anyone who does not immediately recognize the name, City Journal is a quarterly magazine of urban affairs, published by the Manhattan Institute, a reliably conservative think tank based in New York City. According to Wikipedia, the Manhattan Institute was established in 1977 under a different name, the International Center for Economic Policy Studies, and is dedicated to the promotion of free-market economics.
Most recently, the Manhattan Institute has been quite concerned about the "Woke" phenomenon (as one of my other go-to conservative sources, Rod Dreher, has been similarly concerned). Dreher thinks that contemporary journalism, and political discussion in general, has been degraded by "progressives who are drunk on left-wing race grievance ideology." The Manhattan Institute is also upset by recent efforts to consider racial discrimination as an important factor in the analysis of both contemporary and historical reality.
The most recent edition of City Journal ran an article on Quaker schools in the Philadelphia area, which the article claims have "betrayed their historical values." The City Journal article is titled, "Society of Woke," and the gravamen of the complaint seems to be that the Quakers are now teaching "Critical Race Theory" in these Quaker schools. City Journal sees this as a complete repudiation of the schools' "legacy of excellence, ... undermining more than 300 years of commitment to objective truth and betraying the tenets of Quakerism itself."
Quakerism doesn't actually have what I would call official "tenets," so City Journal is a bit off the mark right there, but read for yourself what the City Journal article says:

This “woke” trend has overrun Quaker education in Greater Philadelphia, where about two dozen Quaker K–12 schools and three Quaker colleges operate, from tony Main Line suburbs to the bucolic countryside. Among the 22 regional K–12 schools listed by the Friends Council on Education, 17 have adopted similar diversity, equity, and inclusion (DEI) statements. Chester County’s Westtown School, for example, touts programming that will “strive to uncover and undo our collective and individual biases.”

While such vague pronouncements might seem innocent, they reveal an effort to teach students that they’re forever separated by identity and bound by the historical sins associated with those identities. At Abington Friends School, parents are told that their newly “conscious community” will “provide necessary resources to support both institutional transformation and individual self-exploration and growth around issues of difference.” Wynnewood’s Friends’ Central similarly declared that it’s “engaged in an ongoing journey to confront and unlearn bias and racism personally and collectively to become a more equitable, anti-bias school (emphasis added).”

City Journal seems to think that these schools' efforts to help students and others "unlearn bias and racism personally and collectively" is somehow illegitimate or ill-advised. Not really knowing the facts, or how this effort is being applied, makes it hard to know whether or not the concern of City Journal has any connection with reality whatsoever. Maybe there are some problems in focusing on efforts to "unlearn bias and racism," but the general idea seems to me to be a very good one - and not just for Quakers, either.
The phrase that attracted my attention was the City Journal claim that "Critical Race Theory" is an effort to "teach students that they are forever separated by identity and bound by the historical sins associated with [their] identities." As I say, not really knowing what is being taught, it's hard to comment intelligently. Nonetheless, I would be quite concerned if there were any truth in this specific complaint by City Journal.
No one, ever, is defined and determined by any "identity," and certainly not "forever." The Quaker experience (which is not quite the same thing as a set of "tenets") would absolutely affirm not only that "there is that of God in every person," but that every one of us is capable, always, of surmounting the inertia of our history and experience and transforming ourselves and the world by doing something radically different and new. That includes, specifically, the ability to break down all separations, whatsoever, whether established through differing "identities" or otherwise. There is no "doctrine of inevitability" that proclaims that whatever exists now, or has existed in the past, will continue to exist into the future (forever).
To the degree that anyone is teaching that a person is "bound by the historical sins associated with their identity," they are teaching something that is not true. Learning about and seeking to overcome centuries of white privilege and white supremacy, however, is not remotely a lesson that teaches what the City Journal claims. My bet is that the Quakers of Philadelphia, like the Quakers of Santa Cruz, California, are taking their guidance from Martin Luther King, Jr., and are seeking to move forward to a world in which we are judged not by the color of our skin, or by our "identity," but by the content of our character.
Image Credit:
https://www.city-journal.org/quaker-schools-embrace-critical-race-theory