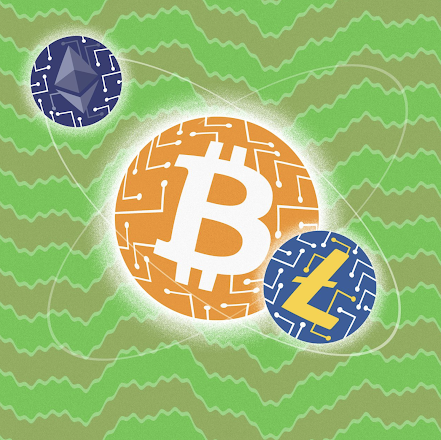 On April 15, 2021, both The New York Times and The Wall Street Journal published articles about cryptocurrency.
The Times' article was titled (in the hard copy edition), "A Coming-Out Party For Cryptocurrency." The Wall Street Journal's article was titled (again, in the hard copy edition), "Coinbase IPO Mints a Billionaire."
Both articles referenced the fact that Coinbase, a cryptocurrency-trading company, was the first of such cryptocurrency companies to "go public," selling stock to whatever members of the public might want to buy it. Lots of people did want to buy that stock, as it turned out, and the thirty-eight year old founder of the company, Brian Armstrong, instantly became one of "the wealthiest people in the world," as The Wall Street Journal put it.
Don't you just love to read about the rich and famous? Lots of people obviously do!
The New York Times' article kicked off its coverage of the event this way:

Digital currency, once mocked as a tool for criminals and reckless speculators, is sliding into the mainstream.

Traditional banks are helping investors put their money into cryptocurrency funds. Companies like Tesla and Square are hoarding Bitcoin. And celebrities are leading the way in a digital-art spending spree using a technology called an NFT.

On Wednesday, digital or cryptocurrencies took their biggest step yet toward wider acceptance when Coinbase, a start-up that allows people to buy and sell cryptocurrencies, went public. Coinbase shares began trading at $381 each, up 52 percent from a reference price of $250, eventually closing at $328.28. That gave the company a valuation of $85.7 billion based on all its outstanding shares, more than 10 times higher than Coinbase’s last private valuation.

Call it crypto’s coming-out party. Coinbase, based in San Francisco, is the first major cryptocurrency start-up to go public on a U.S. stock market. It did so at a valuation that rivaled that of Airbnb and Facebook when they went public.

Cryptocurrency advocates — many of whom expect the technology to upend the global financial system — are celebrating the watershed as vindication of their long-held belief in their cause’s potential.

Coinbase’s listing answers the question “Is crypto a real thing?” said Bradley Tusk, a venture capital investor whose firm, Tusk Venture Partners, backed Coinbase. “Any industry that can launch an I.P.O. of this size is without a doubt a real thing, and it’s proven by the market.”

I remain among those thinking that digital currencies should continue to be linked in our minds to reckless speculation and potential criminal conduct. With apologies to Mr. Tusk, I don't think that "the market" is always the best way to discern what is "real" and what is an illusion. I have my doubts!
Maybe this is because my father took me aside, at a young age, and thrust a book into my hands, and told me to read it: Extraordinary Popular Delusions and The Madness of Crowds, by Charles MacKay. If some authoritative person in your life hasn't done the same thing to you, please let me step into that void, and urge you to read MacKay's book. Bernie Madoff recently died in prison, at age eighty-two. That news made the papers on April 14th, the day before the Coinbase story. Madoff had cheated thousands with his seemingly solid Ponzi scheme. His victims had definitely NOT read MacKay's book!
Cryptocurrencies are not guaranteed by anyone (like a bank, or a country), and invite speculation. Putting one's money into this form is done because of an expectation that the value of the money will increase in value - and increase significantly, way beyond what normal interest would bring.
Why should the money invested in cryptocurrencies increase in value you might ask? Good question. If you have $1,000 in hundred dollar bills in a locked drawer in your desk, you do not expect that you will find $2,000 there when you check the drawer next month. BUT... you do expect that the $1,000 will still be there. With cryptocurrencies, these expectations are completely reversed. People investing in cryptocurrencies expect their value to go up, and yet they know that it is also quite true that their value may diminish, or even that their investment may have disappeared entirely, by the next time they look.
Of course, people like to visit casinos, Las Vegas, and the racetrack, and to place their bets there. I just think it's important that we all recognize what's going on!
Besides the fact that I am clearly a stodgy and conservative person where the investment of money is concerned, there is another problem with cryptocurrencies that I believe is of critical importance. This aspect of the matter was highlighted in another New York Times' article on April 15th. That article was titled, "Though the Money's Digital, The Energy Impact Is Real." Here's a quick summary:

The stock market debut of Coinbase, a start-up that allows people to buy and sell cryptocurrencies like Bitcoin, is a watershed moment for digital money.

It also threatens to lock in a technology with an astonishing environmental footprint.

Cryptocurrencies use blockchain technology, which relies on specialized computers racing to solve complex equations, making quintillions of attempts a second to verify transactions. It’s that practice, called “cryptomining,” that makes the currencies so energy-intensive.

Researchers at Cambridge University estimate that mining Bitcoin, the most popular blockchain-based currency, uses more electricity than entire countries like Argentina do.

“All this accounts for so little of the world’s total transactions, yet has the carbon footprint of entire countries. So imagine it taking off — it’ll ruin the planet,” said Camilo Mora, a climate scientist at the University of Hawaii at Manoa (emphasis added).

Read MacKay's book, and start taking global warming seriously! That's my advice.
I am pretty sure my father would have agreed. I know Bill Maher does!
Image Credit:
https://www.wsj.com/articles/coinbase-stock-price-valuation-and-everything-else-you-need-to-know-11618413312