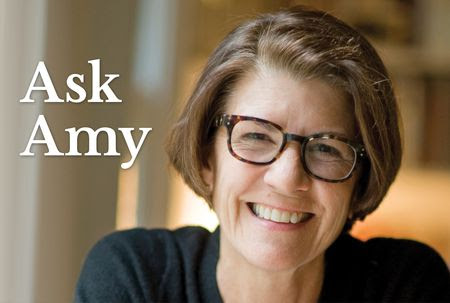 I read a lot of newspapers every day - five every morning, plus some local weeklies, and this doesn't count the papers I consult online. My morning newspaper habit means I get multiple opportunities to read the advice columns of Amy Dickinson. I almost always indulge my temptation to do that, and to see what sort of problems are bedeviling the American public. I generally like Dickinson's responses, too.
I particularly liked Dickinson's column on Sunday, April 18, 2021, which I have reprinted in full, below. You can click the link below, to see it online, or continue with this blog posting. As I read the column in hard copy, the title was: "Newly Married Couple Nurses Gift Grudge." Online, the column was headlined as follows: "Man announces his marriage only via Facebook, then wonders where the gifts are."
The highlight of Dickinson's column, for me, was the "Counter-Narrative" that Dickinson provided, right after warning her aggrieved letter writer to "Buckle Up."
It strikes me that thinking about possible "counter narratives" would be a good practice for all of us, and specifically with respect to our complaints about contemporary politics. We often have a very clear idea of who has done us wrong, and why - and there is usually some merit in our way of seeing the world.
But how often do we really see it from the other person's perspective? Not often enough! When Dickinson tells her advice-seeking letter writer to "Buckle Up," she is letting him know that he has totally failed to see how the very person he is complaining about is actually the one who might have the more legitimate complaint.
That is true in general, and not only in this specific case. This column provides a single example of what I believe is a widespread affliction. You might even call it a lack of "empathy." We need to see the world not just through our own eyes, alone, but from the other person's point of view, as well.
If we were able to do that, there would be a chance for reconciliation. There would be a chance to solve some problems.
In the realm of our personal relationships, and in the context of the larger "political world" in which we live, we all need to "Buckle Up!"
oooOOOooo
Dear Amy: My partner of 28 years and I decided to finally marry (at age 70) last December. Due to the pandemic, the ceremony was conducted on Zoom with just a very few close friends and family members. Shortly after, I announced our marriage and posted a couple of photos on Facebook.

A week later, I received a call from my cousin, who heard about my marriage from one of her daughters (who saw my post). She seemed very happy about it and congratulated us.

Since that call, we have not received a gift or a congratulatory card from her or her family. Months later, it still bothers me. I have always given my cousin and her children gifts for baptisms, birthdays, engagements weddings, etc.

I am saddened that she doesn’t consider my marriage as important as a straight one. She is very religious, so that might be the reason. However, my partner and I have always been included in all her family gatherings over the years and have always been considered a couple.

My cousin and I are like brother and sister. I think this is why it hurts so much.

Should I bring up my disappointment, or try to let it go? Either way, I’m sure this won’t end well.

Dear Hurt: First of all, congratulations! Now, buckle up, because I want to suggest a counter-narrative. Here is the letter I imagine your cousin might have sent to me:

“Dear Amy: My cousin and I are like brother and sister! I have always been genuinely happy to include him and his partner of 28 years in all of our family gatherings over the years, including those really important events such as engagements, weddings, baptisms, birthdays, etc.

Last year, he and his partner decided to get married! This is great news; they’ve been together longer than most married couples I know, and at the age of 70, I’d say it’s about time.

I understand that during the pandemic, any in-person ceremony would be out of the question but imagine how hurt I felt when I learned about this wedding from my daughter, who saw a posting on Facebook. I called them to congratulate them, but I feel hurt that my closest cousin didn’t bother to tell me about his wedding – even after the fact — and I had to learn about it third hand.”

In short: HELLLLLO.
The beauty of a Zoom wedding is that you can include a bunch of people (and you don’t have to feed them)! Why didn’t you include your cousin? Don’t you imagine that she might feel hurt that you didn’t even bother to tell her – afterward? And yet, here she is, picking up the phone and offering a loving congratulations to you both.

No, you do NOT get to feel hurt about this. Share my counter-narrative with your husband and sort your feelings out.
Image Credit:
https://www.oregonlive.com/advice/2021/04/ask-amy-35-year-old-new-mom-panics-about-her-family-not-turning-out-how-she-envisioned.html