#131 / What Whitman Knew About Democracy 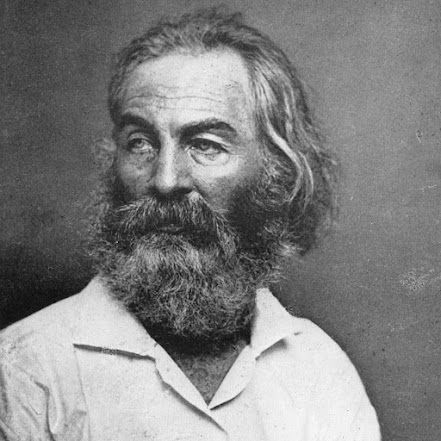 When Walt Whitman began conceiving his great volume of poetry, "Leaves of Grass," in the 1850s, American democracy was in serious danger....

And so it is again!
The quotation at the top of this blog posting (and the photograph, as well) came from a review published in The Wall Street Journal in its Saturday/Sunday, April 17-18, 2021 edition. This review, by Mark Edmundson, is where I got the title for today's blog posting: "What Whitman Knew About Democracy."
And what did Whitman know?
He knew that the metaphor of the grass is the truth of the case:

Whitman’s grass signifies American equality: “I guess it is a uniform hieroglyphic,/And it means,/Sprouting alike in broad zones and narrow zones,/Growing among black folks as among white,/Kanuck, Tuckahoe, Congressman, Cuff,/I give them the same, I receive them the same.” Whatever our race and origin, whatever our station in life, we’re all blades of grass. But by joining together we become part of a resplendent field of green, stretching gloriously on every side.

Whitman found a magnificent metaphor for democratic America and its people. Like snowflakes, no two grass blades are alike. Each one has its own being, a certain kind of chlorophyll-based individuality. Yet step back and you’ll see that the blades are all more like each other than not. Americans, too, are at least as much alike as we are different, and probably more so. America is where we can be ourselves and yet share deep kinship with our neighbors.

And who are our neighbors? Kanuck, Congressman, Tuckahoe, Cuff—Canadian, legislator, Virginia planter, Black man, all of the teeming blades of grass that we see around us. When you stand back far enough, you can’t see any of the individual blades, but look closer and there they are—vibrant and unique, no two alike. We say “e pluribus unum,” from many one. But who could have envisioned what that would look like and how it would feel before Whitman came along?

The grass is Whitman’s answer to the problem that bedeviled his contemporary Ralph Waldo Emerson: how to resolve the tension between the individual and the group. Emerson is sometimes hopeful that the two can cohere. When you speak your deep and true thoughts, no matter how controversial, he believed that in time the mass of men and women will come around to you. Each will say, ‘this is my music, this is myself,” Emerson says in “The American Scholar.” But mostly he is skeptical, believing that society is almost inevitably the enemy of genius and individuality.

Whitman’s image of the grass suggests that the one and the many can merge, and that discovery allows him to imagine a world without significant hierarchy. Can any one blade of grass be all that much more important than any other? When you make the grass the national flag, as it were, you get to love and appreciate all the people who surround you. You become part of a community of equals. You can feel at home.

What I know is that each individual one of us is unique, and that each one of us, individually, is capable of the most extraordinary actions - actions that are sometimes radical and new, actions in the form of sacrifice, actions in the form of generosity and forgiveness, actions that have never been seen or even thought about before, actions that can change the world.
But this I also know, that we are not only individuals. Like the individual fingers on our hands, like the blades of grass, though each one of us is separate, we are absolutely linked. We are in this life together.
Individually we will perish. Together, we and the generations to come will flourish.
May the spirit of Walt Whitman come back upon us, and upon this nation once again. May Whitman's words salve us as a balm, and may we heed the words of Lincoln, too, that Lincoln so beloved of Whitman, as Lincoln spoke the following words in his Second Inaugural Address.
Please let us not forget:

With malice toward none; with charity for all; with firmness in the right, as God gives us to see the right, let us strive on to finish the work we are in; to bind up the nation's wounds... to do all which may achieve and cherish a just, and a lasting peace, among ourselves, and with all nations.